Using a book cover template
instead of a human artist

Most of my book covers are conceived in my mind, and then created on the computer screen of a talented artist. We communicate by phone and email. Most covers go through six to ten revisions over several weeks or several months.

Carina Ruotolo is the artist who turns my visions into reality. Carina and I both attended the Paier College of Art. I went there before it could call itself a college -- when I was in the third grade, for a Saturday program in 1954/55. Carina earned a BFA degree at Paier in 2006, and learned to do much more than I can do. She’s also a much better artist than I am.
Unfortunately (for me) Carina is now busy working as a full-time art teacher. She has a lot on her plate, including designs for about six future books for me.
I am by nature impatient. One of my Marcus Maxims is that "nothing is worth waiting for." So, I decided to get a headstart on the cover of one book project because I thought that beauty was not as important as speed.
Most of my books are printed by Lightning Source, but since I am incapable of producing a cover with the blank template that Lightning supplies, I decided to initially have the book manufactured by CreateSpace, and use one of their more-complete cover templates, and later turn the project over to Carina and Lightning Source.
CreateSpace can accept a from-scratch cover design as Lightning can, but I am far from good enough to make one. However, like most self-publishing companies, CreateSpace has many free cover template designs (six are shown below). Each one allows limited customization. I get to supply illustrations, choose colors and fonts, and plug-in the title, subtitle, my name, my company logo, and the text for the back cover. 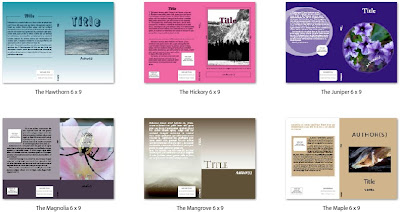 One limitation that really bothered me is that I can't simply stick elements anywhere I want to. The subtitle and my photo have to go precisely where the template designer decided they should go. My font choices are finite. I can't decide to have a shorter version of the title on the spine so it appears in bigger type. I can't have a logo on the spine. On the back cover, I can't choose justification, or even insert italics or boldface or drop caps.

However, I can experiment and manipulate at three in the morning, and there is no charge for making one or a hundred revisions.

Below are two test covers using CreateSpace templates and one of their free photos, of some kind of machinery. The top cover has the photo wrapping around onto the spine and rear cover. The lower cover is more conventional, except for the vertical title text on the front cover. Neither of these covers will win awards, but they're better than many amateur scratch-built designs. 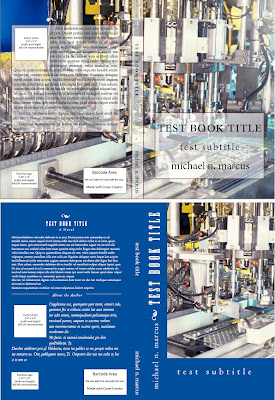 Below on the left is a test cover made with a CreateSpace template and one of their free photos. On the right is an actual book I published through CreateSpace with the same template, and photos from Fotolia.com. I changed the color and typefaces. 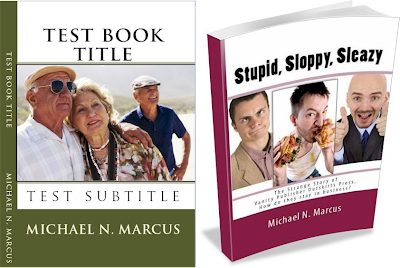 I've developed a family of books aimed at self-publishers. Each recent book has my company logo and the tagline, "Create Better Books with the Silver Sands Publishing Series" across the top of the front cover.
The CreateSpace templates have no provision for inserting the tagline at the top, but I did come up with a satisfactory work-around.
I was able to insert the series tagline, and an additional subtitle, into the white space around the main illustration. I think it's a satisfactory solution. I'm sure that Carina will eventually produce a much better design, but this way the book will go one sale sooner.

There are books about self-publishing for “dummies” and “complete idiots.” Dummies and idiots can’t publish books, and probably shouldn’t write them. My book is for smart writers—but not necessarily geniuses—who want to learn about self-publishing. It's also for people who like funny pictures of dogs wearing oversize eyeglasses. It should be out around 12/1/10. CLICK for some info.
Why is there a dog on my cover?
Books about publishing usually have pictures of writers, readers or books on their covers. I've done those already. I like dogs, especially Golden Retrievers like the one on my "Brainy Beginner's" cover.

Barbara Barth is the extremely talented author of Confessions of the Unfaithful Widow. Barbara has SIX dogs, and has been urging me to put a dog on the cover of one of my books. OK, Barbara, you win. 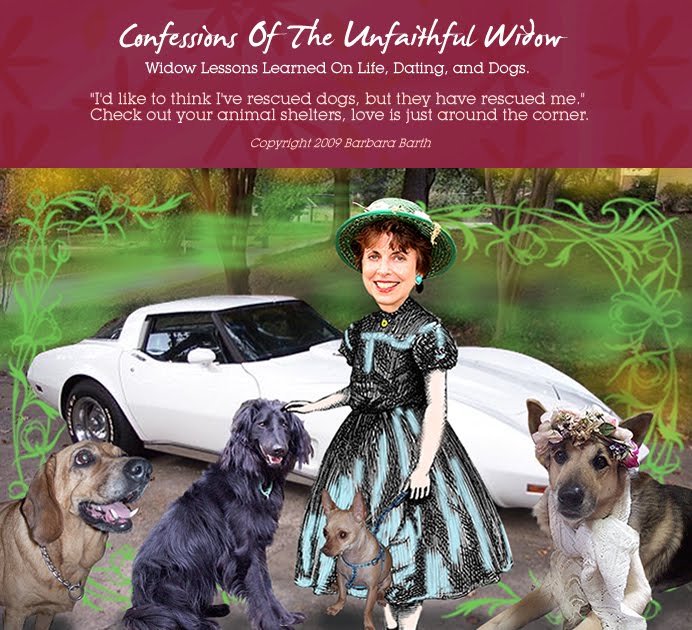