My Black Friday prediction was close,
but not exactly right 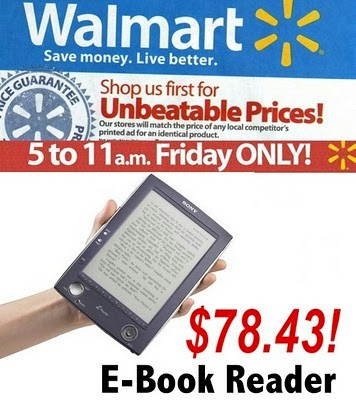 Last July I predicted: "On Black Friday in November, expect to see one or more sub-$100 e-readers, probably at Walmart, BestBuy, RadioShack, Target and Amazon."
I showed the fake ad seen above, but was wrong about Walmart and the low price point.
At Staples, writers will find lots of deals on PCs, printers,  blank disks, hard drives, desks and chairs, software, Duracell batteries and more, and more.
My Friday shopping list includes a new small Nikon camera to replace my three-year-old, a smart cellphone to replace my aging Moto Flipper, a couple of camel hair blazers from Joseph A. Bank ($99 instead of $395!), and a 42" Hitachi TV from Sam's Club for my bro-in-law ($498 with 24 months to pay with no interest -- reg. $150 more). I'll probably pick up popcorn tins and candy bars at Rite-Aid, some thumb drives and SD memory cards somewhere (because I can never have enough memory), and probably some shirts and Blu-ray disks.
The new bragain Blu-rays will go onto the top of a stack which includes still-unwatched Blu-rays I bought a year ago today.
Sadly, the only thing I can't buy today is time.
Posted by Michael N. Marcus at 2:38 AM