Forgive me, Jesus, but I just don't understand why Christians have a much greater urge to self-publish than adherents to other religions 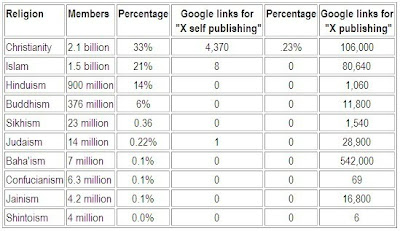 (1) The chart above (left-click to enlarge) was done a while ago, but I have no reason to assume current figures differ greatly.

(2) The answers to some of the questions may be obvious to Christians, but I am Jewish, not Christian, and I don't know the answers.

(3) The table above is both revealing and mystifying. The data comes from Google, which is not 100% perfect, but does offer a pretty good snapshot of the world. The table leads to some questions:
Yesterday I received a press release announcing the formation of the Christian Self Publishing Association. The organization intends to "Serve Authors and Raise the Quality of Self-Published Books." There are plenty of other organizations and websites that have the same admirable objectives.

I don't understand why Jains and Jews don't require such a service, but an examination of the website shows something very disturbing.

The "Association" is not really an association. Apparently there are no members and there is no way to become a member.

The website exists to sell the services (e.g., Contract Review regular price $75, special price $49) of  President/Founder Jim Kochenburger, who is apparently the sole member of the Association.

What would Jesus think?
Posted by Michael N. Marcus at 3:56 AM