But first, read about the same venue 40 years earlier. 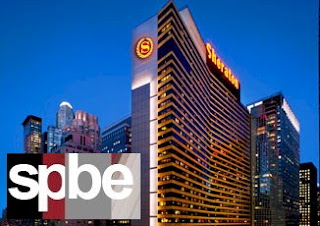 On Saturday 10/2/10, I attended the second Self-Publishing Book Expo (SPBE), at the Sheraton New York Hotel & Towers on Seventh Avenue in Manhattan, uptown from Times Square and downtown from Central Park.

The first time--and the last time--I was at this hotel, it was named the Hotel Americana.

I was there in 1970, reporting on the Consumer Electronics Show for my first post-college job as assistant editor of High Fidelity Trade News ($115 per week and an impressive title).

1970 was in the era of 8-track cartridges, quadraphonic sound, strange-shaped speakers and monochrome video recorders. In those days, a big TV had a 25-inch screen. The monitor in front of me is a 27-incher, wide-screen, flat-screen and hi-def. That description (and home computers, thumb drives, iPads, digital movie cameras, tiny wireless videophones, GPS, broadband and wi-fi) were not even realistic dreams the last time I was in this hotel.

The 1970 "CES" was held at the Americana and the nearby New York Hilton (it has since moved to Chicago and Las Vegas). Trade shows are a great testing ground for young business reporters. CES was a grueling physical ordeal compared to my normal desk work, but had free booze, cool technology and hot chicks.

I had invited my college buddy, Dave Evans, to see the new big boys' toys at CES with me. We spent about eight hours cruising the show floor over and over and over again, with little rest and no food.

When the show closed at 5 p.m., the action shifted upstairs at the Hilton and also into the Americana, where the manufacturers welcomed retailers, journalists and even competitors to their "hospitality suites."

In most cases, a hospitality suite was an ordinary hotel room, with a well-stocked bar, and the bed put in the bathtub so products could be displayed in the center of the bedroom.

The Consumer Electronics Show was great place to learn to be a business journalist and a great place to drink--on other people's money. I got so drunk at the Americana that night in June of 1970, that I never got drunk again. I woke up in a strange hotel room, and didn't know how I got there, or even what country I was in. You can read about my reporting and drinking in my book, Stories I'd Tell My Children (but maybe not until they're adults).

This year, after a 40-year gap (Shit! I feel old writing that), I was once again at the same address and, strangely, again wearing a press pass and checking out new stuff. Since my report goes here on my own blog, I don't even earn $115 per week for writing it. I'm not sure if this is progress, but I'm not complaining.

I was actually at the Sheraton/Americana for several reasons on Saturday. I was entitled to the press pass (actually a badge with a label which proclaimed "MEDIA") because the show management wisely expected that I would write something nice about the expo, and I am doing that. Also, as a self-publisher, I hoped to learn about new products and services that would be useful in my business. I also hoped to do some low-key promotion for my latest book, Get the Most out of a Self-Publishing Company: Make a better deal. Make a better book.

Observations, in no particular order: 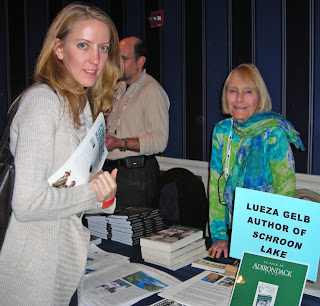 (above) I recently read that while book publishing is female-dominated, journalism is male-dominated. At the Expo I chatted with Molly Gallegos  (left), who recently moved to New York from Colorado. Molly is a talented artist, photographer and writer who wants to make the transition from journalist to author. SPBE was the right place for her to be. On the right is an actual author, Lueza Gelb. Her Schroon Lake was awarded "Best Memoir" by the Adirondack Center for Writing. The book is the memoir of a girl born to wealth and privilege, who watched the family fortune fade. It seemed like a powerful story, and I ordered a copy from Amazon. I would not have ordered the book if I had not attended Self-Publishing Book Expo. I'm updating and relaunching my own memoir in a few weeks, and I'm looking forward to seeing how award-winning Lueza told her story. Heck, the beginning of this blog post is a memoir. Weird. 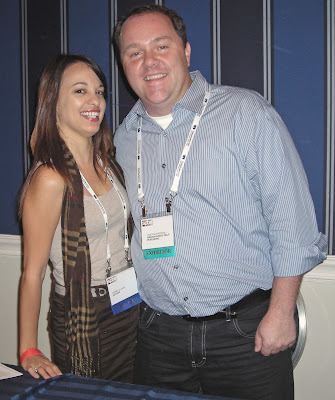 (above) I took photos like this 40 years ago in the same hotel--but back then my Nikon contained film and I got paid to be a reporter/photographer. Saturday I used a digital Nikon, and I covered the show for fun and glory. On the left is Isobella Jade, model and author of new book Short Stuff. Isobella says she's a bit under 5'4" tall. When I was four years old, I was a model, too, and was even shorter than Isobella. The tall guy on the right is Jason Kuykendall, Jeff Bezos's Kindle man in New York. Jason was impressed that I could pronounce his last name and knew the name was Dutch. I was impressed when Jason told me I could format a Kindle book myself.  That tip more than paid for the round-trip train ticket and the overpriced chicken wings in Grand Central Terminal. (BTW, it is "Terminal"--not "Station.") 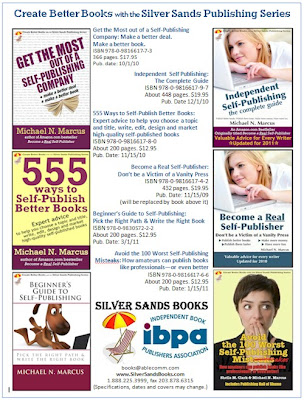 (left-click to enlarge)
(above) With neither intention nor plan, I have already published or will soon publish seven books about self-publishing. The Expo would seem to be a perfect place for me to hawk my books. I did not try for three reasons: (1) I would have to find a way to do remote credit-card authorization which I might never have to do again. (2) I'd have to get involved with the sales tax sadists at the New York State Dep't of Revenue. (3) I had no idea how many books to bring. My books are printed on demand. I did not want to invest in inventory for the show, and then figure out how to deal with leftover stock. (MEMO to Diane and Karen: for next year,  consider a centralized bookstore with credit card processing and maybe sales tax reporting.) 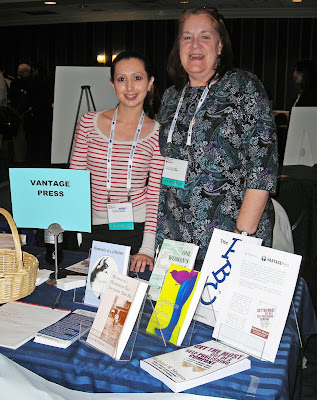 (above) These smiling ladies are Jordan Barbeau (publicist) and Kaylee Davis (director of author care) at the newly invigorated Vantage Press. On the right side of the table is my newest book about self-publishing. Vantage did not publish it, but they like it so much they're giving away copies. Out of camera range to the left was David Carriere, Vantage publicity director. Sorry, Dave, I'd rather look at smiling women--and at my own book. Vantage was promoting a special offer that provided 20 extra copies of an author's books at no additional charge.