As some of you know, early one Saturday morning last June, I received an alarming call from a friend. The friend had received an email saying that I was a convicted rapist who published child pornography, burned my wife, was in prison for four years, drove drunk, used the Internet to find children for sex, was in an international pedophile ring being investigated by the FBI, was a threat to my neighbors, and had even RAPED MY DOG.

As shocking as these false accusations were, things rapidly got worse.

The anonymous accuser sent similar emails to other friends, relatives and business associates, and people in the media. He wrote accusatory letters to newspapers, set up petitions to have me put on a sex offender list, and established a libelous website with false accusations. The site had pictures of me and my house, directions to get there, and my phone number.

The attacker used multiple false identities in the attack, formed a phony organization for credibility, and tried to halt printing and sale of books I wrote. People called for my imprisonment, castration and execution.

The attacker said that I was: a pornographer, a pedophile, a scumbag, a revolting beast, a sick hairy freak with a hairy beard who looks like a pervert, and a depraved, nasty deform­ity with a history of disturbing child sex offenses and sick pedo­philia con­vic­tions, with a forensic history as long as an arm.

The one obvious suspect was a man diagnosed as a paranoid psychopath who had never met me, but knew of me, and I knew of him. Police and the FBI never proved he was the perpetrator. I was able to get some lies removed from the web, but some are still there--and may remain there for as long as the Internet exists.

Under the protective umbrella of the First Amendment, companies that host websites allow anyone to say anything about anyone...and some people will believe the most absurd accusations without any effort to verify them.

Because of the abundant online smears, I immediately halted publicity for my new mostly humorous/mostly true memoir, Stories I'd Tell My Children (but maybe not until they're adults). I didn't want any potential reviewer or reader to Google me and find the horrible libel written about me.

The original book cover had a line that declared, "Dirty Parts Easy To Find" -- a parody of the custom of teenagers to mark the dirty parts in books (such as part of page 149 in the Grove Press edition of Candy, which I memorized in junior high school).

I love my dog, but not that way.

When an FBI special agent visited me to make a report on the case, he saw the book and took the cover line literally. He asked if there were pictures of genitals (i.e., "dirty parts") in the book.

In retrospect, maybe the cover line was sophomoric and ill-advised.

So, I have revised the cover to make it a bit less sophomoric, a bit less sexy, and maybe a bit less offensive to people who were too timid to possess the book and be seen with it.

I will soon release the book with the cleaner cover, and will finally begin the publicity campaign that was supposed to start last June. 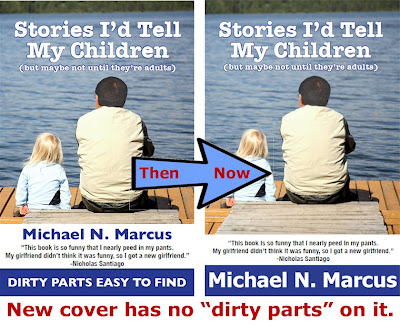 Is there a lesson in this? Actually, there are at least two:
I am now finishing Internet Hell, a book about my ordeal. 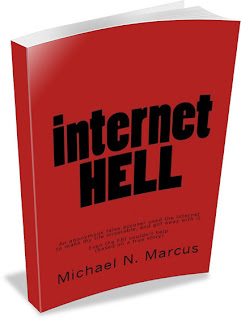