It's the end of Bad Book Week, and I saved the worst for last.

A REALLY SHITTY BOOK IN EVERY WAY.
It could be the second-worst book ever published. 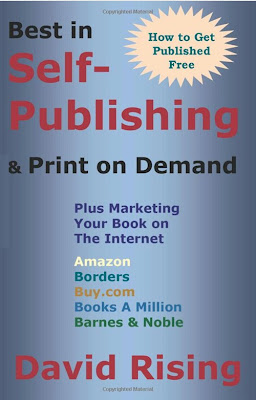 I reviewed this terrible book before. I was curious to see if an improved version had been published, but this version still stands as the author's crowning achievement. This book is so bad that it's worth mentioning again. This is the first time I've used the "S-word" in a headline,

The worst-looking and second-worst-written book I know of is Best in Self-Publishing & Print-On-Demand by David Rising, a charter member of the Self-Publishing Hall of Shame.

The actual title could be the deceptive How to Get Published Free, which is up at the top-right of the cover and on the half-title page.

But, inside, David says the title is How to Get Published FREE: and Make Money.

On the other hand, Amazon.com says the title is Best in Self-Publishing & Print on Demand: Plus Marketing Your Book on the Internet. That’s not the longest title I know of, but it’s one of the worst.

David tries to advise authors on self-publishing, but his own book shows us what not to do. It’s almost a MAD magazine parody of a bad book.

(above) Appropriately, in a paragraph about overlooking mistakes, David overlooked his misspelling of "overlook" and "overlooked."

(above) Like his inept co-honorees in BAD BOOK WEEK, David eschews hyphens and other devices that could fix the UGH-LEE word spacing in his book. This paragraph indicates that David appreciates "a quality book form." Yeah, right.

This book is a perfect example of why self-published books are regarded with suspicion by pros in the book industry. Even if the author was too ignorant or too stupid to notice the errors, the publisher, Lulu, should never have let it out the door. But that’s too much to expect from Lulu. Lulu’s boss says he publishes lots of “really bad books.”

The $19.95 book is puny, with just 136 pages. Pages 135 and 136 have numbers on them, but nothing else. Maybe David expects his readers to finish writing the book for him.

Someone might argue that $19.95 is a fair price, based on the value of what’s inside—but only an idiot would make that argument. TWENTY-SEVEN PERCENT of the book consists of instructions for using Lulu to publish your book. The same information is available from Lulu—for free.

(above) Some book designers like to skip a line between paragraphs. Some prefer to indent the beginning of a paragraph. David does both--or neither. Similarly, in some chapters, both verso and recto pages have identical headers. In some chapters, they have different headers. And, of course, in some chapters there are NO headers. This horrid book has something for everyone.

Typography is atrocious. Some pages are set justified: some are flush-left and ragged-right—depending on where David copied the text from. Justification is unjust. Word spacing is grotesque. Spacing between paragraphs is consistently inconsistent, with large blocks of white space and some silly pictures inserted for no particular reason. 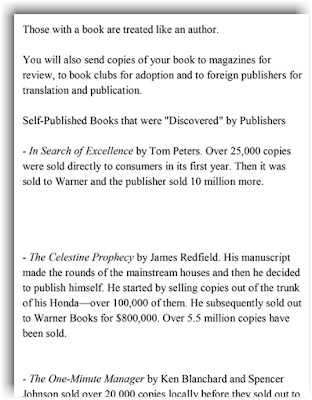 (above) David has a rule for the proper spacing between paragraphs: do whatever you feel like doing at the moment.

David’s writing style is amateurish. His disclaimer speaks to “you, the reader.” Who could “you” be other than the reader? David says, “...could result with...” It should be “could result in.” David believes that an automated spell-checker is a substitute for a copyeditor. It isn’t.

The very first sentence of his introduction has a stupid error: “level playing field for all participates.” That's not a spelling error; it’s the wrong damn word! David also has bad grammar: “There isn’t going to be thousands of unsold books” and “there is always one or two. . .” and “Don’t be afraid you’ll not lose anything. . .” He also says, “. . .your writing should at least see the light as for getting published. . .” and “whether you see sells of any significance.” I have no idea what the hell he’s talking about.

Another gem is “Unlike a traditional publishing house that can spend huge amounts of money advertising a book they think could be a best seller.” David thinks that any chain of words is a sentence, and left out the second “a” in manage. There are more examples, but if I typed more, I’d shoot myself.

The index was apparently assembled by a robot and never checked by a homo sapiens or even by a lower primate—like an orangutan or maybe a smart lemur. 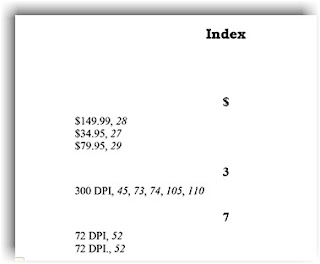 (above) In the index, before the “A” topics, we have topics beginning with $, 3 and 7. The index typography is a strange mix of standard, boldface and underlined text, has no system for capitalization, and uses different fonts. Even email addresses appear in the index. There are terms that no one would ever look for, like "hobby" and "private." Some terms are listed twice. Do we really need 72 DPI as well as 72 DPI with a period after it? (Both are on the same page, BTW.)

Expected terms and names are left out. The UGH-LEE front cover screams, “How to Get Published Free.” The word “free” is not indexed, and I couldn’t find anything about free book publishing inside the book.

The sloppy back cover says, “This book will explain to you how to use database logic.” and inside David says, “Understanding database logic will be a key ingredient to having any success. . . . ” but he doesn’t explain what database logic is.

(above) David's budget for copyediting was somewhere between zero and nothing.
David recommends investing in inventory so you can sell books through Amazon’s “Marketplace” in competition with Amazon itself. He claims, “When a book first goes on sale they will have a very limited supply of books and it can take up to 13 days before a book is shipped.” That’s not true.

This is the only book I can recall that says nothing about its author. That’s probably because there is nothing in his education or experience that qualifies him to write the book.

I’m a strong supporter of freedom of the press. Until now, I’ve firmly believed that any writer should be able to publish anything. However, after buying this slim and nearly worthless volume, I might be willing to consider a licensing requirement for writers. I have no doubt that David would fail the test.

I unfortunately bought the third edition, published in July, 2006. It's nauseating to contemplate how bad the first two editions were. Since there have been no updates in four years, apparently David finally got some sense--and ended his writing career.

Unfortunately, based on Amazon.com reviews (three reviews in over four years), some people bought this pile of crap and relied on it to get into publishing.

In a few hours I'll head into Manhattan for Self-Publishing Book Expo. I'll probably find some more bad books, and some good ones. Next week I'll talk about some of the good ones.