Making lemonade out of a semi-lemon

There is a strong human urge to “do the best I can” which conflicts with other people's advice to “leave well enough alone.”

I discovered one sentence that printed in gray instead of black. I did not spot this on my monitor. I did not want the book to be sold this way, so I decided to delay publication, again.

As long as I was making one repair, I went through the book again, and found 29 items on 366 pages that, while good enough, could be better--so I fixed them.

While doing the revisions, always-helpful publishing maven Joel Friedlander suggested that since I will soon have five or six books about publishing, I should identify them as a series. Joel was right, and I was stupid not to have thought of this myself.

So…I took time to develop a series tag line ("Create Better Books, with the Silver Sands Publishing Series"), and asked my cover artist to make a series logo which has to work well on covers of three books that have already been designed.

Coincidentally, I was never really happy with the cover of the "Get the Most"  book. Since the cover had to be modified to add the new tag line, I requested some other changes that made the cover much stronger, and eliminated the pesky frame that seems to never get printed the same way on two books. 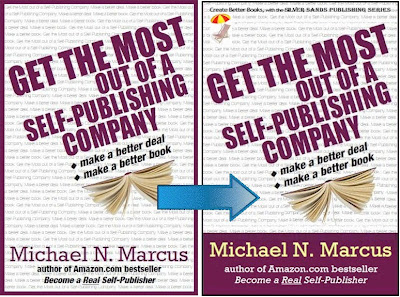 My cover artist is just now starting a new career teaching art, so I have to wait for her to find time for me, which delays publication even more.

If I was willing to live with a little bit of text that should have been black instead of gray, none of this would have happened. Few readers would have noticed. Probably none would complain.

The book would have been “good enough”--but not the best I could make it.
Posted by Michael N. Marcus at 5:35 AM