Another writer who probably
should not be writing

(From the A&A Printing website, written by Mills Cooper, except for my comments in bold blue)

Mills Cooper was born in sunny Plant City, Florida in the summer of July, 1978. I graduated from Plant City High School in 1996, and after completion, I went on to continue my studies at Clark Atlanta University. I played briefly in the arena football league from 2001-2004, and back in 2003, I managed to get a tryout with the Minnesota Vikings. After a brief career playing football, I decided to put down the helmet to become a professional writer. (Sorry--a professional writer would not use the third person in the first sentence and switch to first person in the second sentence. Also, you don't have to tell us that July is in the summer.)

Back in 2008, I was put in a bad position  (Uh-oh. That's the year you started your movie business.) that left me homeless, sleeping in my car on the streets of Plant City. During this time I made a decision to submit my life to GOD, and really search out what he wanted me to do for my life. While fasting and praying, GOD revealed to me (It sounds like God was fasting and praying.)  through people what he wanted me to write about, which was informing people about generation curses. (It would be good to explain what they are.) God wanted me to be a writer, (It's too bad God didn't send you an English tutor.)  but he wanted me to write and try to win souls for the kingdom. I feel like it's my duty to do so, being that we are living in the last days. (On your website, you wrote, "I feel like its..." with no apostrophe.)

Whatever sinful activity that you indulge in, (Which one do you recommend?) this book is for you! I will show you in this book that the life you are living now may find a way to repeat itself. If you are a person that (who) doesn't practice sinful behavior, then that's wonderful! But if you take a second to look at your family tree, you probably will notice a repeated pattern of sin that's running through the blood line. (Bloodline is one word.) If you do, then this book is definitely for you as well!

These things that I have mentioned can cause, or are results of (You need a comma here.)  a generation curse. In this book, I will be taking you on a journey through a fictional story, (Would that be useful?) and giving an example of how and why these things occur. Most importantly, I will show you (You need a comma here.) as the reader (Who am I, if not the reader?) (You need a comma here.)  how we can stop this dark force (Darth Vader?) that has so many of us in bondage. Generation Curse is a book that is straight to the point, and trust me, (Why should I trust you?)  my friend, (I'm not your friend. I don't even know you.)  it will definitely keep your attention.

Amazon shows one used copy available for $88, plus shipping. I think I'll pass.

(Deliberately switching to third person) The author's website has a section called "What Readers Are Saying." The readers had nothing to say. Maybe no one will pay $88 for the book.

The blog page is missing the apostrophe in "Read the Authors Blog" in two places and has no blog posts. Maybe Mills has nothing more to say. 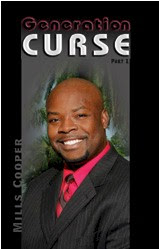 Here's even worse writing from his MySpace page:
My name is Mills and am from the sunny Plant City,fl. My occupation is screenwriting,and acting. I am the president of mills cooper film productions (inactive) ,and c&c publishing company. (Not in Google.)  I have my first book that's do to come out late aug,or early september. Also My first film feature will be completed by the summer of 2009. As far as my education,I attended clark atlantaprofessinal football briefly,before I found my true calling. I'm very commited to reaching my goals,and being successful in life. Whatever am involved in I put my heart,and soul into it. So whatever person comes into my life they can expect this same response. Which is being commited and faithful. I would like to meet a person who has the same drive I have pretaining to life. It's only far because if we don't have the same energy we'll only be working against each other. My interests are: weightlifting,reading,writing,cycling,running,cooking,and just being around good wholesome people. I listen to the kind of hip hop that make since.
Posted by Michael N. Marcus at 2:45 AM