A year a go, perpetually and pathetically inept and dishonest Outskirts Press proudly announced that Inc. magazine named Outskirts to its annual “Inc. 500” list of the nation’s fastest-growing privately-held businesses.

I pointed out  that Outskirts had lied about the nature of the award ("fastest-growing self-publishing company") and may have been listed in the wrong category (is publishing really a consumer service?"

On its website and blogs and in press releases, Outskirts frequently described itself as "an Inc 500 Company."

Three weeks ago, Outskirts boss Brent Sampson blogged, "...the annual Inc. Magazine Fast 500 list is announced at the end of this month....We placed #268 last year among all private companies and #1 among participating self-publishing services. We’ll see where we are this year when they’re announced later this month…"

In the words of  the frequently unimpressed Nelson Muntz from The Simpsons, Ha ha!

The new Inc list has just come out. Outskirts is bragging again--but has much less to brag about!

Here's the first paragraph of the new Outskirts self-congratulatory press release: Denver, CO, August 24, 2010 --(PR.com)-- Outskirts Press, an Inc. 500 company in 2009 and the fastest-growing full-service self-publishing and book marketing company, was recognized once again by Inc. Magazine in 2010 in its annual "Fast 5000" list of the nation's fastest-growing private businesses.

And of course, Outskirts continues to lie about the award with its claim to be "the fastest-growing full-service self-publishing and book marketing company." That description comes from Outskirts--not from Inc!  Also, the ranking from Inc: (1) applies only to private companies, and (2) applies only to companies that applied to be ranked.

Outrageous Outskirts fraudulently chooses to ignore a competitor which ranked much higher.

According to Inc, Outskirts had three year growth of 234% and Blurb grew 4829%. The Outskirts claim to be the "fastest-growing full-service self-publishing and book marketing company" is a GODDAM LIE.

"We are honored once again to be recognized by Inc. Magazine on this annual list," said Brent Sampson, Outskirts Press president and chief executive officer. "To appear on this list once is a feat; and twice in a row is a true testament of our commitment to quality, customer service, and value for our authors."

Sorry, Brent. Your listing is not a feat--it's an embarassment!

What Outskirts is not bragging about is that its Inc RANKING DROPPED BY NEARLY ONE THOUSAND PLACES IN ONE YEAR. Also, the Outskirts three-year revenue growth reported in 2010 is LESS THAN ONE THIRD of the figure for 2009.

Apparently sales increased a bit, but the company STILL HAS JUST THREE EMPLOYEES, and the year of the company's founding has strangely changed from 2002 to 2001. 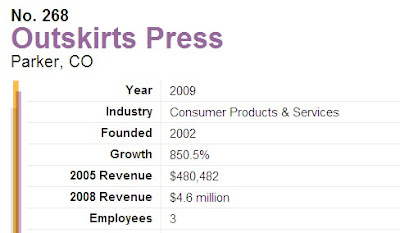 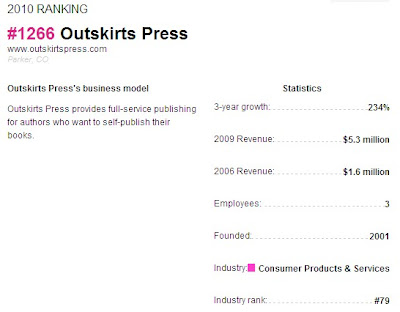 You have probably been advised that, "If you have lemons, make lemonade." Outskirts takes the advice a bit further, believing that, "If you have a lump of shit, squirt some whipped cream on it, drip on some syrup, stick on a cherry, and call it a Chocolate Sundae."
Sorry, Outskirts, but bullshit, even sweetened-up bullshit, is still bullshit.
Maybe next year, Outskirts will brag about being listed in the "newly expanded Inc Five Billion."
As before, Outskirts competes in the "consumer products and services" category. It would be much more logical for a publisher to be in the "media" category. However, if Outskirts was listed in media, it would suffer in comparison to the much more successful Blurb. 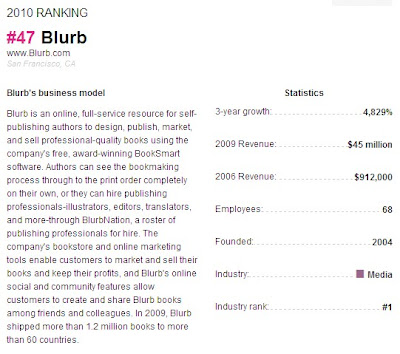