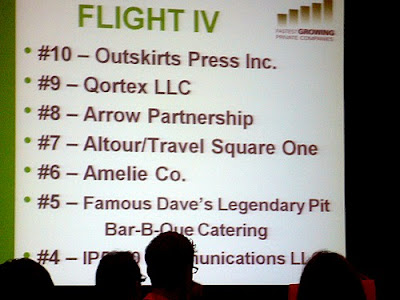 Now it's time to slam them again:

Of course, none of those books are really free. Authors have to pay $999 for the package.

Take a look at the other entries shown in the image of the projection screen up above. Business may be done differently in the Rocky Mountains, but here on the East Coast, travel agencies, ad agencies and pork-pullers do NOT provide publishing services.

Outskirts boss Brent Sampson wrote, "...winning an award helps establish some prestige and PR, and those are valuable commodities in this day and age."

The award might have more value if Brent had not improperly described his competitors. He published similar distortion with last year's INC 500 award.
Posted by Michael N. Marcus at 7:47 AM