A morbidly light-hearted blog about death 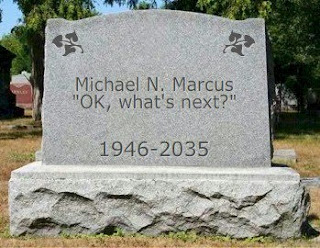 If I don't start a new blog or website about every eight weeks, I get itchy.

I was born in 1946. I am a proud member of the first cohort of the Baby Boom, along with Dolly Parton, Donny Trump, Billy Clinton, Georgie Bush, Candy Bergen, Reggie Jackson, Tommy Lee Jones, Cher, Sly Stallone and Oliver Stone. Goldie Hawn is a year older and Rob Reiner is a year younger--but I'll grant them honorary cohortship. Both Barbara Streisand and Paul McCartney were  born in '42 and are holding up well; but they're too damned old for honorary membership in the forty-sixers.

When I was a young teenager, I felt invincible. I thought I could live FOREVER. 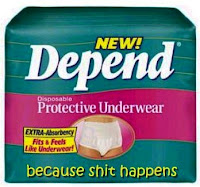 Now, at age 64, I'm much more realistic. I know that I won't last forever. Some of my high school classmates have died. One is in a nursing home. Some friends have had knee replacements. I had a lens replacement a few months ago and will need another one. Other body parts don't work as well (or as frequently) as they once did. I'm contemplating cosmetic surgery for my wrinkled old-man's neck, and I watch TV commercials for items that I previously ignored (NO--not adult diapers, thankfully).

As a teenager, I was focused forward. I contemplated getting a driver's license, getting laid, going to college, voting, drinking legally, making money, seeing a new century, seeing the world, and maybe even seeing other planets.

At 64 there's not that much to look forward to.

If I'm still around on 4/15/2011 (and if the Federal treasury is still around), I'll start receiving a big Social Security check each month. Unless the politicians fuck it up, Medicare should pay for a big chunk of my growing medical bills.

I am not looking forward to retirement, because I love my work. I'd still like to travel some more.

I have no children or grandchildren to see graduating or marrying. I probably won't go back to school.

There are no foods I haven't tasted yet that I want to taste. 3D-TV doesn't impress me. (It might, when the geeky glasses are eliminated). I'll probably never own a Ferrari or go sky diving or water skiing or bungee jumping. I've done enough snow skiing, and even went SCUBA diving under the ice. I already live with the best dog in the world and have been married to a very sexy woman for a long time.

So...it seems like the next big event after my 65th birthday will be my death.

Based on one online calculator, I should die when I'm 88 years old. My father died last year, at 87. Supposedly we should live five years longer than our same-gender parent, which should give me 92 years. Expecting to go beyond 90 seems a bit piggish, so I'll settle for 89 years. That's conveniently 25 years from now--a quarter-century--which gives me a good title for the new blog.


My final quarter-century above ground
at http://bloggingaboutdeath.blogspot.com/
So I'll blog about getting old and getting dead. It should be an interesting ride--even if it's all down hill.
Posted by Michael N. Marcus at 5:45 AM