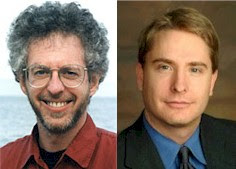 Two of my previous books about publishing, Become a Real Self-Publisher and Stupid, Sloppy, Sleazy, made a distinction between books published by “real” or “independent” self-publishers, and books published by author services companies. Those businesses often call themselves "self-publishing companies," and are less charitably known as vanity publishers.

Those two books urge writers to avoid those companies, but they acknowledge that “real” self-publishing is not right for every author and that there may be legitimate reasons to use those companies.

I will not cease my support for “real” self-publishing, but I started re-thinking my position as the self-anointed/appointed Guardian of Language as I prepared to write what became my new book, How to Get the Most out of a Self-Publishing Company (which should be available around 8/15/10).

For the last two years, I've expended a lot of effort and a lot of words combating (or combatting) the term "self-publishing company." I frequently attacked the companies that used the label, pointing out that THE TERM MADE ABSOLUTELY NO SENSE, because no person or company can self-publish someone else.

While I still believe that, I recognize that, for better or for worse, the meanings and implications of words do change—and I can't stop the changes.
In Lewis Carroll’s famous Through the Looking-Glass and What Alice Found There, Humpty Dumpty told Alice, “When I use a word, it means just what I choose it to mean.”

Aaron Shepard, a widely recognized authority on self-publishing and a big help to me when I got started, criticized my "Real Self-Publisher" title for being "tendentious" (i.e., espousing a particular point of view). That's OK. The title, the book and my life are tendentious.  Apparently Aaron thought that my position on the use of the "self-publishing" term was too restrictive. (BTW, Aaron's new POD for Profit is extremely good, and belongs on the bookshelf of every self-pubber who hopes to make money.)

Brent Sampson, the boss of Outskirts Press, made an effort six months ago to distinguish "self-publishing" from "self-publishing companies." Brent wrote, "Self-publishing companies are service companies who provide valuable (and convenient) services to writers for a fee. This is no different from any other service industry. For example, I can either choose to do my own taxes, or I can pay H&R Block to do them for me." That's true. However, Brent also came up with some preposterous bullshit about self-publishing companies using that term to warn—rather than to attract—potential customers.
Brent is not alone in his interpretation of "self-publishing." His competitors and their customers, and media ranging from The Wall Street Journal to Writer' Digest, agree. Much of the world has accepted "self-publishing company" for what used to be called a "vanity publisher" or a "vanity press," so there's not much point in my continuing to bang my head against an unyielding concrete wall.

THEREFORE, I will no longer debate the semantics and illogic of the term "self-publishing company"—but I will continue to let you know which of them lie, produce crappy books, overcharge their customers or do a bad job promoting books.

MAYBE, there's really not a hell of a lot of difference between a writer who hires separate designers and editors and publicists, and a writer who gets them all in a convenient package from one source. 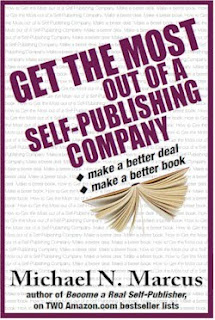 I DOUBT that I'd ever go for convenience over control, but I recognize that convenience could be the right choice for others—especially if they learn from my new book, Get the Most out of a Self-Publishing Company: Make a better deal. Make a better book.
The theory behind this book is that it’s possible to get a high-class book even from a middle-class or low-class publisher, at a reasonable price, if you carefully supervise them and do some of the work yourself, and perhaps purchase some services and supplies on your own.
Don’t buy services and trinkets that you don’t need. Pay the right prices for what you do need. Let the publisher do the nitty-gritty tech stuff that you don’t want to get involved in, and concentrate on the creative process to make a good-reading, good-looking book which you can be proud of and perhaps make money from.

(Shepard photo from Playbooks.com)
Posted by Michael N. Marcus at 5:30 AM