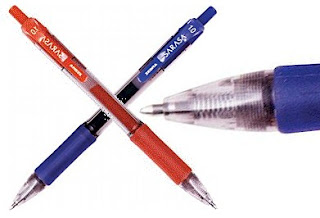 I've never bought "fine writing instruments." I've received some as gifts and several have remained in a drawer for lengths of time ranging from eight to 51 years. Maybe my heirs will use them.

(Ethnic humor time: I'm Jewish and my bar mitzvah was 51 years ago. At one time, fountain pens were common bar mitzvah gifts, and a joke was told that a nervous bar mitzvah boy started his speech with, "Today I am a fountain pen." That's also the title of a play. )

OK, back to work. The main reason I don't use expensive pens is that I know they'll get lost. I'll drop them in a parking lot or on the lawn or leave them in a bank or restaurant.
If I have to lose a pen, I don't want it to be a $40 Cross or $300 Montblanc.
I could easily tolerate losing an 11-cent Bic pen, but I could not tolerate using one.
My upper limit for pen-spending is a buck and a half, but a buck is better.
For the last decade or so, my standard pen has been the Pilot Precise V5 Extra Fine rolling ball. I generally pay between $12 and $18 per dozen. My standard color has varied between blue and black over the years, and sometimes I've switched from extra fine to fine and back. I always have some reds for marking errors in my books and other authors' books.

I also use Sharpies in various sizes for writing on plastic, wood or metal. They're very smooth but no good for paper because they bleed through a page.

About six months ago I happened to accumulate a Sarasa Gel Retractable pen. I have no idea where it came from, but it found its way into the visor of my car. It was a click-top retractable pen, which seemed very retro in 2010, and I never lost it because I never used it.

One time it was the only pen in the car, and I needed it to endorse a check for depositing at the drive-up bank teller.

I was immediately impressed by the ultra-smooth writing.

When I got my office I found requests for a few autographed books. In the past I would have used a Pilot, but I opened up and tried one of my new Sarasas. It was love at first write.

I have never encountered anything this smooth -- except maybe for a baby's ass or a timeshare salesman.

Red Sarasas quickly became my standard book-editing pens, and I use blue Sarasas for pretty much everything else. I generally lose them before I use them up, but I can afford to replace them when they're gone. One time I couldn't find Sarasas and tried PaperMate's gel pens -- they're not nearly as smooth. Pilot and some other companies have gel pens, too. I can't imagine they'd be better than my Sarasas, and have not tried them.

Sarasa medium-point pens are made in 10 colors. Fine-points are made in blue, black and red. There's also a bold version. You can get a 10-color multi-pack, and single colors in 5- and 12-pen packs. The big bargain is the pack with 20 black, 2 blue and 2 red Sarasas.

Gel pens -- at least the ones I've tried -- are a little bit weird. The first time I tried to use one of my new Sarasas, it would not write. That's because the tip comes with a protective blob of something (maybe wax, maybe plastic) that you have to remove before writing by rubbing the pen on paper. Once I figured this out, the pen worked fine. The retro click-top is actually a blessing, because there are no tip covers to lose as wiith my Pilots.

Sarasa says the pens use a water-based gel ink that's acid-free and archival quality. Unlike the ancient click-top 10-cent ballpoints of my youth, they are not refillable. There's an enlarged rubber grip on the lower portion of the pen. It's very comfortable to write with. If I'm ever fortunate enough to have to autograph hundreds of books for my fans, I'll use a Sarasa.

My Sarasa pens are made by our southern neighbors in the land of tacos and chihuahuas. The factory is operated by the Zebra Pen Corporation, founded in New York in 1982 as subsidiary of Zebra Co., Ltd., of Tokyo. The American Zebra HQ is now in New Jersey and offers ball point pens, highlighters, mechanical pencils, gel roller balls and correction pens. I've tried only the Sarasa gels.

The Zebra trademark was adopted way back in 1914. According to corporate legend, Mr. Ishikawa, founder of Zebra, wanted a company name that would be memorable and also appropriate for use in other countries. He took an English/Japanese dictionary and, opened it -- Japanese style -- from the back, and started with the "Z" words and discovered "Zebra."

Apparently Ishikawa learned that zebras are gentle animals with a strong family herding instinct. This was an important attribute, since he wanted to build a business in which employees and customers were all part of a family-like culture. The fact that the zebra looks like it is decorated with large calligraphic pen strokes may have also made the visual image appealing.

Because of my location, It may be heresy for me to use a pen made in Mexico by a Japanese company.

I am writing this blog in Milford CT, a few miles away from  the site of a huge Bic Pen factory. Sadly, Bic moved their pen and single-blade shaver production out of the country, firing about 300 of my neighbors  four years ago. .A real estate development company paid $14 million for Bic's warehouse, factory and office space and is trying to fill it up. The Bic factory is said to have made about 3,000,000  ballpoint pens, 2,500,000 shavers and 1,000,000 lighters per day. The factory has left town, but Bic Drive is still here. The world headquarters of Subway is on Bic Drive.

A few more miles from me, but in the opposite direction, is the Connecticut Tennis Center at Yale. That's the site of Pilot Pen Tennis.

I don't care about tennis, but I still have a few boxes of unloved and untouched Pilot Precise pens that may never get used.. Now I'm a Sarasa guy!
Posted by Michael N. Marcus at 4:49 AM