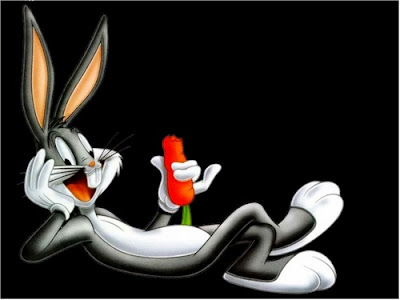 Bugs Bunny's appearance in A Wild Hare, directed by Tex Avery and released on July 27, 1940, is considered to be the first appearance of both Bugs and Elmer Fudd in their fully developed forms. It was in this cartoon that Bugs first emerged from his rabbit hole to ask Elmer, "What's up, Doc?" It is also the first cartoon where Mel Blanc uses a recognizable version of the voice of Bugs that would eventually become the standard. (info from Wikipedia)

TV Guide (and lots of fans) have "wated" the "wascally wabbit" as the top cartoon character of all times, beating that wimpy Mickey Mouse.

Bugs has balls. He's a wiseass. He kicks ass. He fought the Nazis and Japanese during World War Two. He's an American hero, and has a star on the Hollywood Walk of Fame.