For the second day in a row, something light. 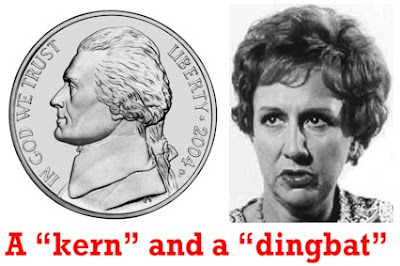 Presented for your amusement -- some words from publishing and journalism which may not be particularly useful, but I think are fun and/or interesting. More are in my book, Become a Real Self-Publisher: Don’t be a Victim of a Vanity Press.

Dingbat: Printers’ slang for small, icon-like drawings of hearts, snowflakes, and other shapes and items that can be used to dress up a document. Also, what Archie Bunker frequently called wife Edith on All in the Family.

Fleuron: A flower-like decoration used to enhance a book or to divide sections.

Flong: One of my favorite words! A flong was originally a dry, papier-mâché mold made from type text which could be curved to fit the cylinder of a rotary press. Later flongs were wet, and made of plastic or rubber. If you fling a flong, it may get damaged.

Kern: That’s the way some people born in Brooklyn (but not my father) pronounce “coin.” In typography, “to kern” means to adjust the spacing between two adjacent letters. It can also mean to squish two letters together so they overlap to avoid awkward white spaces. WA is one common use of kerning, and the two letters fit together unusually well. A kern is also a part of one letter that reaches into another letter’s personal space.

Lede: The first sentence or two in a news story, with the most important information. It’s pronounced “leed”, but spelled “lede” to avoid confusion with another typographic term, “lead,” which rhymes with “bread.”

Pilcrow: a symbol that looks like a fancy reversed uppercase "P" that is used to indicate where a new paragraph should begin.

Slush pile: Unsolicited manuscripts received by an agent or a publisher and often piled up on a desk, a shelf, or the floor, awaiting evaluation. These are also described as “over the transom” manuscripts. The phrase refers to the horizontal bar above a door and below a hinged window provided for ventilation in an office without air conditioning. Writers allegedly tossed their manuscripts over the transom of a publisher’s office, ran down the hall and hoped for the best.

Swash: An extra bit of decoration added to a printed letter, often an extended or exaggerated serif on the first letter in a paragraph

TK: In the graphic arts, it’s shorthand for “To Come,” a notation made on a layout to indicate that an element (such as a photograph or chart) will be provided later and space should be provided for it.