Our language is infested with baby talk
(and other poopy stuff). 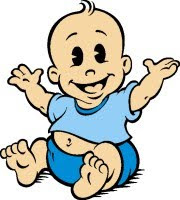 Like many old farts, I detest the degeneration of American English which I frequently witness on streets, in offices, in stores and restaurants, on the phone, in classrooms, in movies and on TV.

I'm particularly pissed off about the substitution of "HEY"  for "hello." It seemed to make a rapid transition from playgrounds to CSI Las Vegas and then to the rest of the world. When I was a child, If I used that word, my proper mother would scold me with, "Hay is for horses--not  for people!"

I'm even more pissed off by the use of "WAS LIKE" as a replacement for "said." It seemed to start with Hollywood's dimwitted blonde bimbettes and even spread to the White House! Time magazine quoted George Dubya Bush using that stupid phrase.

Both Dubya and Barack regularly say "gunna" instead of "going to." That's not the way English used to be spoken at Yale and Harvard.

I'm also annoyed by what I see as the rampant infantiling of speech. Baby Talk is creeping into adult conversations.

I confess to sometimes ending phone conversations with "bye-bye," but I refuse to say "my mom" instead of "my mother."

I reserve "boob," "pee," "poo," "poop" and "tummy" for jokes or for conversations with kindergartners.

Southern "speech" is a topic for a future posting. For now I'll just say that I find it very difficult to take people seriously if they sound like they just climbed out of some "holler" in the deep south. My ears and brain shut down when someone says "poke" for "bag" or "done" for "did" or "Coke" for all brands of soda--or TYPES "y'all" in emails.

OTOH, northeast speech often pisses me off, with the cliched "Pock yaw cah in Hahvid Yahd."

The beloved Yankee Stadium announcer Bob Sheppard recently died at age 99. He was known as "the voice of God" and was complimented for his expert elocution. Although he performed in a stadium in daBronx, he sounded like he was in Fenway "Pock" in Boston--never pronouncing a final "R." Derek's last name should NOT be pronounced "Jee-tuh." The boss's last name was NOT "Steinbrenn-uh."

Not only do many New Englanduhs (and some New Yawkuhs) drop R's, sometimes an R gets put where it doesn't belong. My ninth-grade English teacher in N'Haven said, "Ameriker."

In Manhattan, you can meet someone at the intersection of "toity-toid and toid."

A bit east of Brooklyn is Lawn Guyland, and if you travel west you'll reach New Joisey. If you go far west, you might hear Governator Ah-nold say "Cally-fawn-yuh."