Perpetually Imperfect: Should I try to make my books better than what the "pros" turn out? 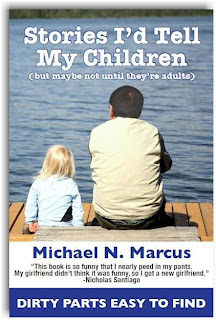 My book, Stories I'd Tell My Children (but maybe not until they're adults), was supposed to go on sale on April 1. Because of problems at the printer, it was delayed and delayed, and finally a 6/1 pub date seemed realistic. It's a funny book, and I had to revise my press release from focusing on April Fools' Day to summer reading.

But, as publication was delayed, I read it over and over again, and found more errors that were previously unnoticed, and I had to fix them. This meant more delay, and more expense. I know that it's impossible to have a "perfect" book, but I just can't let myself publish a book that has known errors in it.

I operate a one-person publishing company and hire freelance editors to watch over me. I can't understand why the giants in the publishing field, with huge staffs of well-paid professionals, turn out books with silly, easily spotted errors.

I'm about half through reading Toxic Talk: How the Radical Right Has Poisoned America's Airwaves by Bill Press. It was published by Thomas Dunne Books, a division of St. Martin's Press, which is part of Macmillan Publishers, owned by Georg von Holtzbrinck Publishing. Although Holtzbrinck is not as famous a name as Levi's or McDonald's it one of the "Big Six" in publishing -- not exactly a couple of kids working in a tree house.  I'm amazed that none of its eagle-eyed editors noticed a "mute" that should have been "moot" or "blond" that should have been "blonde."

In Orange County Choppers: The Tale of the Teutuls there are silly errors in geography ("Muncie" instead of "Monsey" and saying that the Teutul home was within walking distance of Yankee Stadium, when it was really a 17-mile round trip). This book was published by Grand Central Publishing, which is part of  Hachette -- the second-largest publisher in the world. It was written by three Teutuls, plus two professional authors, and there must have been a few editors involved, too. One of them should have caught the errors before I did.

When I was a writer on my college newspaper, I became the copy editor and got a job as a proofreader at the printer, so I could have complete control of my words, and no one else could mess them up. (This also meant that no one else could correct the mistakes I missed -- in retrospect, not a good way to work.)

When I was freelancing for Rolling Stone, I was always rewriting until the last possible minute. This was in the pre-fax, pre-email era, and I'd drive to the airport and pay to have my column air-freighted from NY to CA. There wasn't much profit left.

Words are almost toys for me, like a child's building blocks, Lincoln Logs, Lego or Erector Set.

Rewriting and editing -- especially now with a computer -- is fun. I love to play with words, to rearrange them and try alternatives.

The danger is that a perfectionist never finishes anything.

When I was working as an advertising copywriter, I was notorious for not "releasing" an ad until the last possible moment. Fortunately, someone older and wiser taught me a valuable lesson: sometimes "good enough" really is good enough, and I learned to let go.

Now, as a self-pubber who has to be a businessman as well as an artist, I realize that no money will come in if I don't approve a proof and let a book start selling.

So, the book that I conceived when I was in sixth grade, way back in 1958, should be on sale next week. I hereby declare that it is "good enough." I hope I'm right.