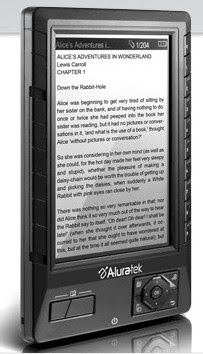 On Tuesday, Borders and Aluratek announced that Borders will feature Aluratek's "Libre" eBook Reader Pro in Borders' growing lineup of eReaders. Pre-orders are now being taken at www.borders.com/libre with shipments to begin in early July. The Libre will be available in Borders stores within special digital shops called "Area-e" in August.

The Libre will be sell for just $119.99, significantly lower in cost than many of the eReading devices now available. The new eReader is in line with Borders' plan to provide a "good, better, best" selection of eReaders to appeal to many customers. With the included link to the Borders eBook store, Libre users can access the upcoming Borders eBook store.

The Libre offers multi-function features such as the ability to play digital music and display digital photo albums at a low price point. Other features include auto-off, page advance, and "innovative LCD technology and superior battery life that powers up to 24 hours of continuous use. "

I paid a lot more for my iPad, and every day I become more confident in my decision.