FUCK YOU, LensCrafters (the sequel) 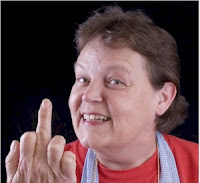 About half of the following post is from one of my other blogs, dated 1/15/09. It's worth clicking to see the comments to the original posting, from LensCrafters customers and employees.  My recent experience is down at the bottom.

I recently misplaced -- or actually lost -- the eyeglasses that I use when working at my computer.

After a couple of frustrating days searching my house, office and cars, and suffering with an old inadequate pair of glasses, I declared them officially gone.

I didn't need a complete pair of glasses -- just lenses that would fit into any of several no-longer-used eyeglass frames.

Not wanting to prolong the agony, I went to my local LensCrafters. I've bought from them before and was pleased with the product selection, quality and fast service -- but my wife said I paid too much.

The company advertises that they can make glasses "in about an hour" and has perpetual sales like the mattress stores. Their regular price seems to be their 25%-off price and they have lots of two-fers.

LensCrafters is part of a huge vertically integrated Italian company, Luxottica -- the biggest eyewear company in the world, with many stores and many brands, including Ray-Ban.

The company makes glasses sold with lots of "designer" labels such as DKNY, Polo and Versace. They operate the eyeglass departments in Sears, K-Mart and Target, plus their own LensCrafters, Pearle Vision and Sunglass Hut stores. With over 6,000 retail outlets and dozens of brands, it's hard to not buy from Luxottica.

There's probably no company that can make frames and lenses as inexpensively as LensCrafters. The corporate websits brags that Luxottica has "lowest production costs and the highest margins."

I expected to pay a bit extra for quick service and an expensive mall location -- but I had no idea I'd get fucked as badly as I did.

Even with my 15% AAA discount, a pair of basic single-vision lenses, with no special coating, would have cost a whopping $192.

If I was willing to buy a complete pair of glasses to take advantage of the alleged 25% discount, and settle for an ugly frame from the closeout section, the total would have been $215.

I left and ordered a perfect pair of complete glasses at Costco for $59. I had to wait about 10 days for them, but I'd rather be part blind than a complete idiot.

According to a study by MIT, a typical pair of lenses costs two bucks to make. The raw material in the frame is worth pennies. At least one online source will sell me a complete pair of glasses for under ten bucks.

I certainly don't mind if Luxottica makes a profit. But if they get greedy, I walk away.

And if the greedy bastards are stupid enough to brag about their high profit margin, I'll tell everyone to stay away.

A couple of weeks ago I had a cataract removed from my left eye and an artificial lens implanted. If you live long enough, various body parts need to be replaced.

As a result of the surgery, my left eye has excellent vision. The optician who works in the ophthalmologist's office removed the prescription lens from the left side of my "distance" glasses and installed a non-prescription "plano" lens, which worked fine.

Thursday, confident that my "new eye" had stabilized, I wanted to get a plano left lens for my Ray-Ban sunglasses, which were purchased at LensCrafters about three years ago.

Fearful of LensCrafters prices, I went to Costco. Alas, their lab does not work on Ray-Ban frames. Costco did, however, order me two new lenses for my "computer" glasses for $29, installed.

Desperate, I went to LensCrafters. I was surprised to learn that I would need a prescription to get a non-prescription lens. In the LensCrafters world, I suppose that cops arrest people for not breaking the law.

They also told me that it would be necessary to get two new lenses, because the colors of the old and new lenses would not match.

Friday I went back, with my prescription.

The thieving motherfuckers wanted $255 for a pair of lenses, after my 15% AAA discount.

I expressed shock, and was told that for just $231, I could have the pair of lenses AND a new Ray-Ban frame.

I resisted the urge to punch and puke, and walked out.

A local optician can replace the lenses for just $90.

Or I can order a Ray-Ban frame WITH two lenses, online, for $99. But I hate to buy a frame when I don't need one, and even if I spend just $99,  the hated Luxottica will still get a piece of the action.

I feel trapped and defeated. I don't know what to do. Maybe I'll just shut my eyes and get a white cane.

It's Too Easy To Get Pregnant
reports on some of the tragedies caused by people who should not be parents.

I never did it, was never arrested for it, never tried for it, and never convicted of it

tells the story of Michael's horrible and damaging harassment, and his response.


Oh, how stupid! provides an an occasional look at some of the stupidest things done by human beings.