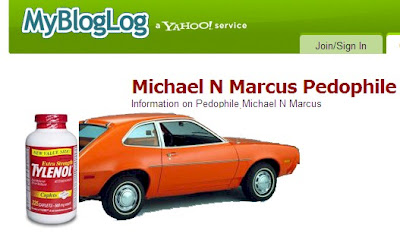 On Friday, 6/25/10, someone started a well-crafted online smear campaign using multiple websites, Facebook and mass-messaging, falsely accusing me of some terrible crimes. This blog tells the story. I hope the final blog entry will be a description of the SOB going to jail.

Several people who became aware of my sad situation early, advised me to keep quiet "until it blows over."

I decided to be more proactive, and quickly started the blog as a counterattack, hoping that anyone investigating the bogus claims would find my side of the story and believe me, or at least investigate further.
I drink Pepsi and use Extra-Strength Tylenol, and am following their examples in crisis management.

I urge others to do the same. If you wait until the bad news blows over, you may blow over, too.

If you are portrayed as a perpetrator, it's important to show that you are a victim

(Tylenol photo from J&J, Pinto photo from HunterTrek.com).
Posted by Michael N. Marcus at 7:08 AM