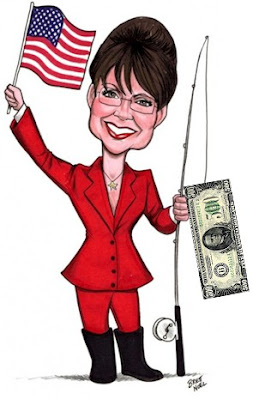 If any of you have been concerned that your lack of writing experience or ability could hinder your chance of making big bucks from writing, here's some good news.

The half-term Alaskan governor and would-be vice-president now has a deal for a second book.

It's titled "America By Heart: Reflections on Family, Faith and Flag," and will be published in November.

Publisher HarperCollins said that the book is a "collection of Palin's favorite patriotic and family-based literary passages. It will include "the nation's founding documents to great speeches, sermons, letters, literature and poetry, biography, and even some of her favorite songs and movies. The book will also include portraits of some of the extraordinary men and women she admires and who embody her deep love of country, her strong rootedness in faith, and her profound love and appreciation of family." But probably not Levi Johnston, the father of her first grandchild.

(Cartoon by Brett Noel, with money added by the blogmeister)