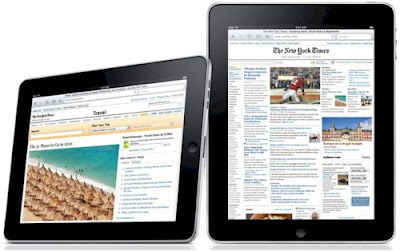 Radio talker Alex Bennett likes Apple computers and the iPhone, but has been bitching about the iPad. Last week he spent $2300 on a new MacBook Pro. He's been criticizing the iPad, despite not owning one. Maybe even without using one.

The only specific criticism he had was that the screen was difficult to see in bright sunlight.

He told of someone he knew who was disappointed with the iPad, and when I told him how much I liked mine, he said, "The iPad is not all it promises. You will have buyer's remorse if you haven't already."

Last Friday, he ranted that people buy iPads and then find they don't know what to do with them. If what Alex said is true, the people he referred to are idiots.

On Friday, after listening to Alex ON MY IPAD, while sitting in my car, waiting for my wife, I did the following with my iPad.

Far from having buyer's remorse, I like my iPad more each time I use it.

Here's what I said about it before.

A few days ago I went into my local Barnes & Noble to buy some mags and discuss a book promo event with the manager. I also had my first hands-on experience with the Nook eBook reader. I tried swiping a displayed book page with my finger to move to the next page. Nothing happened. I thought the Nook was defective.

Then the manager told me I had to press a button to view the next page. PRESS A BUTTON? WTF? That's how people interacted with technology 50 years ago.

Defending his product, the manager said that the Nook's "electronic paper" display did not create eye fatigue like the illuminated display on the iPad. I told him that I had not experienced any fatigue with my iPad and I can use it in a dark room.

He said that the Nook was much less expensive than the iPad and is intended for people who just want to read books. That's like buying an inexpensive car that lacks a trunk, because you plan to transport people only. I told him that it seemed silly to settle for a button-operated monochrome e-reader, when I could get a colorful, big-screen, touch-screen e-reader that could do a great many things besides displaying dark gray text on a lighter gray background.

This afternoon I'll be giving my less-than-a-year-old Acer netbook to my sister. I have no reason to use it again.