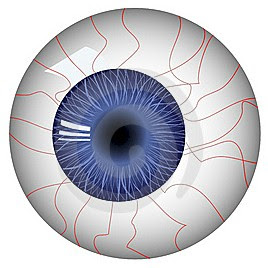 I've never won a medal for bravery. I've never been known as a macho man.

But through the course of my life, not much has frightened me. When I was a little kid, I used to collect bumblebees by grabbing them by the ass and putting them in a jar, climbed up and jumped off telephone poles, and had cavities filled without Novocaine. I even went SCUBA diving under the ice when I was a teenager.

On the other hand, I was scared by the wicked witch in Snow White and begged my grandmother to take me out of the theater.

As an adult, I've never had to go to war, never got scared by a movie, and willingly ate raw clams.

HOWEVER, I am super-squeamish, a real baby, when it comes to handling sharp blades. I am terrified about getting my hand cut, and don't even like to hear about other people getting a hand cut. And the notion of a blade near one of my eyes scares the crap out of me.

Nevertheless, in less than an hour, I will be going to a surgery center to have my left eye sliced open. I'm going to have a cataract removed, and a synthetic lens implanted.

Lots of people -- including both parents -- have had the same surgery and told me it's no big deal and I have nothing to worry about.

I've often said that worry is the most useless emotion, but this morning I can't help being worried.

In 1972 I was blind in one eye for about six months. My vision came back, but the cause of the blindness was never discovered. When I had just one functioning eye and no spare, I lived very differently. I was very protective of the one good eye, and was timid to cross the street.

I was born with two legs, testicles, arms, kidneys, lungs, ears and eyes. I've gotten used to having them in pairs, and want to keep my full collection.

I hope that Dr. Sprotzer's aim is accurate and his hand is steady, that my worry is unjustified, and that I'll be blogging again tomorrow.