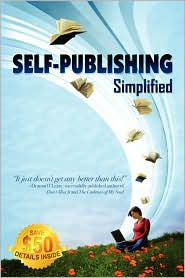 This book's idiot author says it's hard to read the book.

Here's what was distributed above Brent's name in a press release: "Now publishing a book is easier than reading one..."

Not only is that a ridiculous statement, it also makes Brent seem extra-stupid, because the sentence continues: "...if you happen to be reading Self-Publishing Simplified..."

Brent wrote that book, so he's saying that it's harder to read his book than it is to publish a book.

What a jerk. If he wasn't the boss, he'd be fired.