Who's better at grammar:
Donald the boss or Cyndi the apprentice? 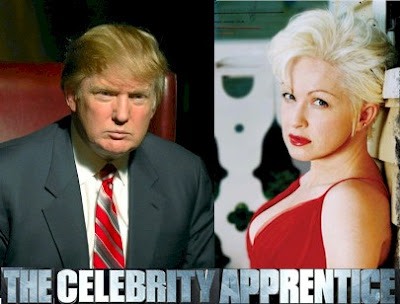 Near the end of last Sunday's episode of The Celebrity Apprentice (which I saw Thursday night via Tivo), fun-loving girl Cyndi Lauper said, "I feel bad."

Creatively coiffed zillionaire Donald Trump corrected her, insisting that Cyndi should have said, "I feel badly."

Cyndi accepted the correction, and no one else on the set -- not the contestants nor the pretty Trump kids -- disagreed with Donald.

And since the scene was not cut out by the show's editors, they must have assumed that Donald was right, too. Or they were afraid to challenge him.

Donald may be successful in business, but that doesn't mean he speaks proper English.

And despite her heavy Noo Yawk accent, Cyndi's grammar is just fine.

Most kids learn the difference between adjectives and adverbs around fourth grade. Cyndi got famous singing that "Girls Just Want to Have Fun," but she apparently paid more attention to grammar than Donald did.