What's more useful, an iPad or a garage door opener?

I expect to have a birthday in a few days.

My wife generally favors practical gifts. For our last anniversary, she requested a set of new tires (which even the tire salesman said she didn't need) for her minivan. She's a dog-mom, BTW, not a soccer-mom.

I, OTOH, regard a bunch of McDonald's coupons as the best wedding gift we received. It's easy to spend money. It's harder to make me smile.

Yesterday Marilyn said she thought of "a cool gadget that we both would enjoy." 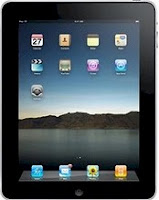 I've been talking about getting an iPad, had pointed out some of its advantages, and thought that maybe she realized that it would be a sensible addition to our huge hardware collection.

Despite a few golden moments when she mastered and enjoyed Google, Marilyn has refused to touch a computer for a few years. I've kidded her about the iPad being a "computer for dummies" and she didn't throw anything at me when I said it.

She's read a bit about the iPad but there are gaps in her knowledge. Last night I explained to her that "app" is not shorthand for "Apple." Marilyn never reads my books but she has said that she'd like to read my blogs. I doubt that she'll read this one.

I was shocked and disappointed to hear Marilyn suggest buying an automatic garage door opener for my birthday.

We have three garages, and three cars.

Only one of the cars -- my 1978 Fiat Spider "toy" -- is ever in a garage. My PT Cruiser commuting car and her Town & Country van get parked in the driveway. (And of course, ha-ha, they are driven on the parkway.)

The Fiat is kept in the left-hand garage. This car is used only from April through October, maybe going 1,000 miles a year, and I am its only driver. Marilyn would certianly not benefit from a remote control for the Fiat's garage door.

The space behind the right-hand door is used to store my 1964 Vespa motor scooter, my 1962 Raleigh Gran Sport bicycle, the pool cover, snow shovels, and a bunch of gardening crap. We have lots of empty flower pots and pails of dirt and rocks, bags of grass seed that probably died years ago, and chemicals to improve the health of roses that died years ago. I also have a workshop/man cave taking up about 60% of that space.

The center garage has lots of shelving, for things like light bulbs, long extension cords, Halloween decorations, the Poland Spring mini-fridge, and sundry household parts and supplies. It's also where we keep four ladders, three trash barrels, four recycling bins, surplus laundry chemicals, winter boots, barbecue tools, boxes of stuff still unpacked since we moved in nine years ago, and boxes of stuff that's supposed to go to Goodwill. Most of the time there is a pathway through the center of the rubble that leads from the garage door to our "mud room" door and the kitchen beyond. In wet weather or if we're hauling suitcases or heavy packages, we enter the house through the center garage.

I doubt that pressing a button to open that door would save much time or effort -- especially since Marilyn would likely lose or drive over the remote control.

I previously wrote that I thought the iPad would be fun, but I didn't really need it. I also said that, "In my life, wants often out-rank needs."

I certainly don't need either a garage door opener or an iPad -- but it's easy to decide which one I want more.

---------------
UPDATE: I had planned to get the middle model with 32 gigs of memory. It turned out that BestBuy was offering 18 months to pay with no interest, so I invested another hundred bucks and got the 64GB model.

I've only had it a few minutes, so a full report will have to wait a few days. My instant reaction is that it is SUPER-COOL, and Wi-Fi web access is super-fast. The touch keyboard works fine. This is MUCH more fun and much more useful than a garage door opener.