Can you spell "Stupid?" 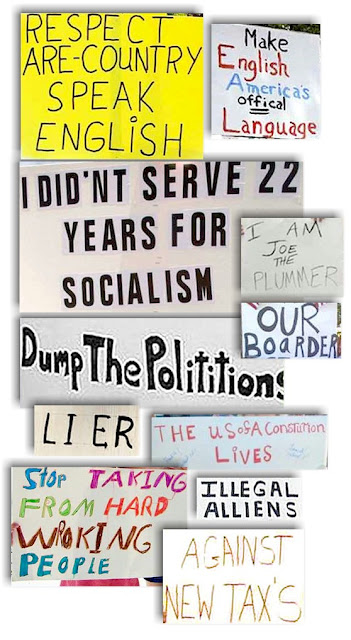 The New York Daily News calls itself "New York's Hometown Newspaper" and it's aimed at a blue-collar audience, like joe-da-plumma.

For over 70 years, until 1991, the paper touted itself as "New York's Picture Newspaper" in apparent recognition of its customers' limited literacy.
Its editorials have generally been conservative. Letters-to-the-editor are frequently anti-government, anti-politician, and recently pro-Tea Party.
That's why it seems particularly strange that last week the paper published a collection of signs with bad spelling and bad grammar hoisted by protesting Teabaggers.
OTOH, maybe it's not so strange. Also last week, the largely white-collar New York Times published results of a poll (co-sponsored by CBS) that revealed that Teabaggers are "more well-educated than the general public."
So, maybe the News is engaging in a bit of class warfare by pointing out that even those highly edgimikated protistors kant spel gud.
...
Posted by Michael N. Marcus at 5:34 AM