Outskirts Press made a few improvements
-- but is still stupid! 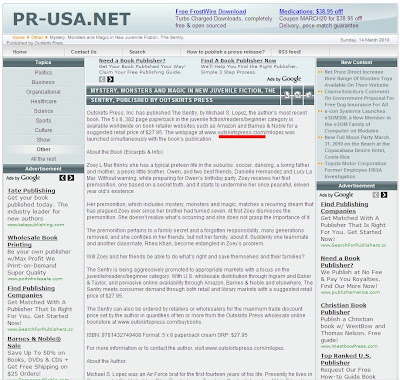 (Left-click on image to enlarge it for easier reading.)

Outskirts Press is a frequently incompetent and dishonest vanity publisher. The company does so many things so badly that it frequently makes me scream and laugh.

Outskirts uses a template for quick production of its releases, and little bits of stupidity remain year after year.

No one at Outskirts will respond to my emails, but, as demonstrated by the press release above, it seems that someone at Outskirts has been reading this blog, and has made an effort to fix some of the worst offenses.

Unfortunately, as usual, the release is awkwardly written ("many generations removed," and "The premonition pertains to") and is filled with Outskirts' traditional cliches ("being aggressively promoted to appropriate markets" and "meets consumer demand through both retail and library markets.") There are fundamental editing errors such as spelling out ten, eleven and fourteen instead of using 10, 11 and 14.