Oh goody! Another incompetent vanity press has been born. 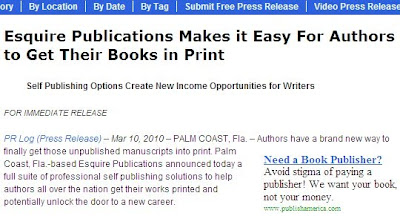 Vanity publishers love to pose as "self-publishing companies." It's the scam du jour.

I just received a press release from the newest entry in the field, Esquire Publications. I assume it won't be long before the company is sued by Hearst Communications, the publisher of Esquire magazine, for trademark violation.

The new company announced itself to the world with a press release. Like its older inept competitor Outskirts Press, Esquire chose to use PR Log, a freebie news distribution service, instead of a paid-for service.

Since Esquire did not pay PR Log to make the announcement, PR Log has to make money somehow.

They make money by carrying ads FOR COMPETITORS of Esquire, including vanity publishers PublishAmerica, Outskirts Press, iUniverse and Dorrance.

Elva claims that GSH Publishing is "The Most Trusted Name In Publishing."

I don't know who did the research, but apparently that claim is not enough to bring in the big bucks. So, like Harlequin and Thomas Nelson, GSH has decided to get into vanity publishing.

Although she operates an editing service and has written several books, Elva is a terrible writer and editor.
The press release says, "Self publishing services from Esquire Publications starts [sic] with the basic package priced at only $999. Valued at more than $1250..."  Who established the valuation?

The $999 package provides "complementary paperback copies of the book." Sorry, Elva, but if a writer has to pay $999, the books are NOT complementary.

The press release also says, “Poetry is growing in popularity as people use it often as an outlet to express their thoughts and feelings.”  It seems to me that's why people wrote poetry 2500 years ago.