It's nice to find a computer with a sense of humor 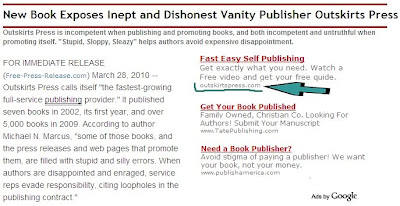 (Left-click on image to enlarge)

In the past I've criticized incompetent and untruthful vanity publisher Outskirts Press for using free press release distribution services which publish ads for competing companies right next to the Outskirts news.

The ads are distributed by Google's computers, and they show up on web pages that have "key words" selected by the advertisers. Outskirts itself uses the system for some of its advertising.

Outskirts Press is paying to put an ad on a press release web page with a headline that says that the company is inept and dishonest.

I love this stuff!