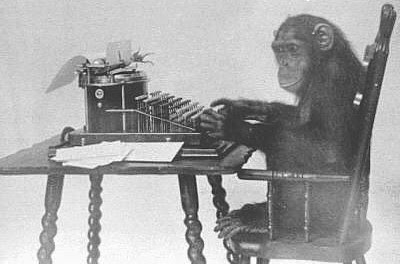 The Infinite Monkey Theorem states that a monkey hitting keys at random on a keyboard for an infinite amount of time will type Hamlet (or Romeo and Juliet, or the complete works of Shakespeare, or the Declaration of Independence, or the entire Bible). Variations of the theorem employ an infinite number of monkeys, not just one.

In 2003, a British university tested the literary output of real monkeys. They put a computer keyboard in a monkey enclosure at a zoo. The monkeys produced five pages mostly of the the letter S. One monkey smashed the keyboard with a stone, and others urinated and defecated on it.

What follows is from from http://businessideas.doodig.com/.  It's a little bit better than what those monkeys achieved.


Publish your book
The best way to tell how a good idea to publish your book cars look how easy it is for the market. If it is difficult, then sell, not just a good idea.
The best idea of self publishing book will be interesting, and a breeze on the market mainly because it tends to focus on solving some pressing problems of the target market that the business of publishing itself has identified and decided to concentrate to focus on is . For example, when you use a blog as the book market isSimply, the keywords and key phrases, the best motion of the major search engines tend to be identified. The number of hits on the blog is attracted in this way exactly the target market niche, which aimed at the book and is very easy to market and sell.
In fact, the narrower the niche is your best idea of self publishing the book, targeting the best and most effective the book is intended to be. One of the mistakes the first time you do the editorsis to groped around for everyone. It works in any store, and there is reason to believe that it works, even if you are publishing a book and then it is in your interest and a good idea to avoid at all costs in general.
...