Pulpy non-fiction.
A bad review for a book I haven't read yet. 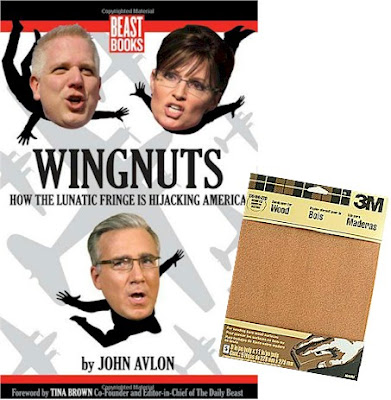 Yesterday the man with the big brown truck brought me a copy of Wingnuts: how the lunatic fringe is hijacking America. Written by John Avlon, it deals with the wackos on the far-right and far-left wings of politics, such as the 9/11 "truthers," the "birthers" who insist that President Obama was born in Kenya, and those who accept MooseMama Palin's "death panel" paranoid fantasy.

This is the debut pubication from Beast Books, a joint venture between the Perseus Book Group and The Daily Beast, a website dealing with politics and pop culture.

Tina Brown is co-founder and editor-in-chief of the Beast. She's an author, talk show host, and an award-winning editor. She edited Vanity Fair and The New Yorker, created Talk magazine and is in the Magazine Editors Hall of Fame.

Although she is apparently not a trained designer, she is credited with redesigning The New Yorker and hiring Richard Avedon as staff photographer. So, Tina should know something about publishing production values. She cares enough about her own work to have claimed a copyright for the foreword she wrote for Avlon's book -- an extremely uncommon practice.

So why am I pissed-off about a book I have not read yet?
It looks like crap, feels like sandpaper, and costs too much.

According to The New York Times, "Perseus is paying The Daily Beast a five-figure management advance to cover the costs of editing and designing the books."

Based on what I've seen and felt, Perseus grossly overpaid.