I'm not sure if Outskirts Press is cheating or stupid, but I know it's lying. 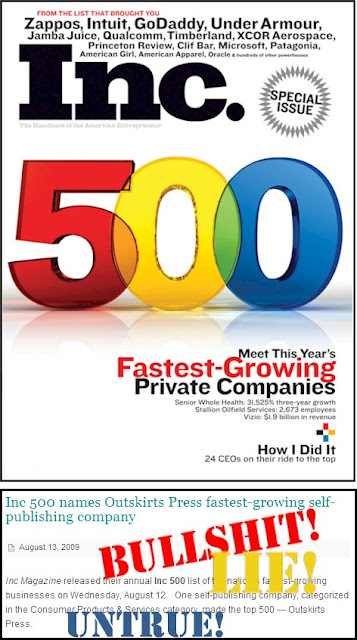 In its September 2009 issue, Inc. magazine named Outskirts Press to its annual “Inc. 500” list of the nation’s fastest-growing privately-held businesses. The ranking is based on the rate of revenue growth from 2005 through 2008, when Outskirts Press claims it grew by 850.5%.

Outskirts Press is the 21st fastest-growing business in the Consumer Products & Services category on the Inc. list. Inc. lets companies choose the category they compete in.

Book publishing does not seem to be a genuine consumer product or service, like laundry detergent, fast food, DVD rental or shoe repair.

So, did Outskirts choose its category because it expected to gain an unfair advantage over other companies, or just because it's stupid?

The company is often both.

An Outskirts Press press release writer (probably Jeanine Sampson or Kelly Schuknecht) wants the world to know that Inc. magazine declared Outskirts to be the “Fastest-Growing Self Publishing Company.”

Forget, for just a moment, that Outskirts is not a self-publishing company.

The release stupidly says: “sales of self-publishing books climbed 132% while the sales of traditionally published books fell by 3%.”

“Self-publishing books” would be books about self-publishing, just as running books are about running. The release should have said "self-published” books.

Even worse, Outskirts is seriously distorting the statistics (originally provided by R. R. Bowker). The 132% growth was for on-demand books, which include much more than self-published books. Major traditional publishing companies print-on-demand, as do university presses, vanity presses, and real self-publishers.

Outskirts is notorious for deception, exaggeration, and stupid errors. Company boss Brent Sampson wrote a book that showed that he didn’t know what a foreword is, and he forgot the last name of the author of Roget’s Thesaurus — among other sins. He apparently had no editor or a blind editor. Or maybe none of his employees is willing to correct the boss. Some of his employees are relatives.

Brent promotes himself as a “bestselling author.” I’ve twice asked for specifics about his bestseller status, but never received an answer.

A book about flea removal from pregnant three-legged albino Weimaraners could sell exactly one copy and still be the BESTSELLER in its field. There is no law that requires an explanation for a bestseller claim. Anyone can call any book a bestseller.

The press release about the Inc. 500 status says that from 2005 through 2008, “Outskirts Press grew at a rate of 850.5%, making it the fastest growing self-publishing and book marketing company and #268 among all American businesses.”

In truth, Outskirts Press might be #268 among the businesses that submitted information to the magazine. But only the IRS has the data to judge revenue growth of "all American businesses." And companies can lie to both the IRS and to Inc.

Inc. conveniently supplies a press release template for use by honorees.

Here’s part of it: “Inc. magazine today ranked COMPANY NAME NO. XX on its 28th annual Inc. 500, an exclusive ranking of the nation’s fastest-growing private companies.”

The Outskirts company profile published by Inc. says that the company’s 2008 sales were $4.6 million. While that revenue is equal to three or four McDonald's restaurants, it does not mean the company is a titan in the publishing business.

Business information provider Manta.com said that Outskirts' competitor Author Solutions “has annual revenue of $29,300,000 and employs a staff of approximately 260.” Random House, the world’s largest English-language general trade book publisher, reportedly has annual sales of about $2.3 billion and about 6,000 employees.

The Outskirts Press company profile published by Inc. says that Outskirts has just three employees. The Outskirts website shows three employees (all named Sampson.) Judging by the poor quality of the company’s output, those three people must be terribly overworked and/or terribly unqualified for their jobs. 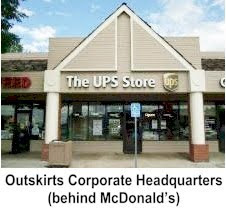 With about $5 million in annual sales, I'd think the Sampson clan could afford a nice office -- but the mailing address for the company is a private mailbox at a UPS Store.

Brent and his family probably work at home in their underwear or pajamas. At least they don't spend much money on commuting. How green!

According to Linkdin, Director of Author Support Kelly Schuknecht lives in Iowa. She probably doesn't commute to Colorado.

Outskirts Press is a vanity press that calls itself a “self-publishing company.” It grows by exploiting ignorance and gullibility. As journalists and prospective customers continue to catch the company’s lies, distortions and stupid errors, its growth will not continue.