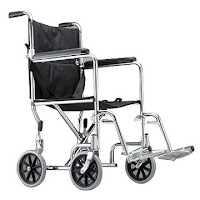 I'm in south Florida for a few days.

The main reason is to visit my mother, who recently fell (old people do that a lot) and broke her collar bone. She's been living alone since my father died last summer.

My mother (I despise that juvenile "my mom" phrase) is 87 and has had a lot of injuries over the last decade or so. She has a pacemaker implant and so much metal inside her that I call her my "bionic mother." Until about a month ago, she drove her car to stores and doctors and restaurants and the hair dresser -- the basic itinerary for people of her age in Florida. Her vision is deteriorating and she turned in her driver's license a few weeks ago.

Mom used her walker to get to and from the car. She was able to do a lot, but everything she did required a great effort. To get off the bed or a chair or out of the car, she uses her arms to move her legs. A couple of times she fell and got stuck in the bathroom and had to be rescued by the 911 squad. Once she spent about eight hours on the floor of the john because she couldn't reach her panic pendant. Now Mom's walker has been replaced by a wheelchair, and she needs someone (this weekend it's me) to push her around.

But the important thing is that she wants to get around, even if her legs don't work well enough to transport her. I hope I've inherited her spirit (but not her frailties).

If I had all her problems, I think I might just say "fuck it" and stay in bed with a remote control, a cordless phone and a bedpan; and ring a bell when it's time for my 24-hr. aid to empty the pan and wipe my ass, or bring me a meal or give me a sponge bath.

Although she has never been a physically active "jock" (except for one summer when she was forced to play football with strong men in a phys-ed class she needed for grad school -- at around age 50), Mom has always been extremely mentally active. If she could get her brain transplanted into a new body, she should be good for another century or two.

Like my father, Mom attended a high school for "the gifted." She is responsible for half of my IQ and my lifelong love of reading and my drive to be productive before the chickens wake up (I start blogging at 3:30 a.m.).

The compulsions to read and get out of bed early came together when I was in junior high school and we watched Sunrise Semester together on TV. It started at 6 a.m. Mom watched it to get her master’s degree. I watched it because I liked classic Greek literature. Lysistrata is an extremely funny and sexy anti-war play, written over 2400 years ago by Aristophanes. I highly recommend it.

Like me, Mom usually reads at least three books each week. We're both very fast readers, but Mom never became computer literate. She won an award for penmanship eons ago, but never learned to type; and got special permission to submit her master's thesis in handwriting. There was no Wite-Out or correction tape on it.

My father was a pretty-good two-finger typist (I've recently regressed from six fingers back to two), and used an iMac for occasional email. When I was down here two years ago, I had to use a crappy intermittent AOL dial-up connection. Last year I used slightly better AT&T DSL. Now I'm connecting this laptop through a neighbor's zoomy Wi-Fi. It's fast, reliable, and it's FREE.

My mother does not share my love of technology. Only one of her TVs has a flat screen and her camera uses (GASP!) film. Despite the free Wi-Fi and my offer of a new PC, she feels no need to learn to type at this stage. She still writes beautiful-looking letters in longhand, even though her hands are filled with nylon and stainless steel.

Getting old sucks, but it usually beats the alternative (dying young).

In mid-morning, while my mother's aid is here, I'll go out for a while and visit another old person.

Lawrence DePalma taught me English and History when I was in the seventh grade, back in the 1958-1959 school year. (Yeah, I'm that old. I'm a proud member of the first cohort of the baby boom, born in 1946 along with Cher, Oliver Stone, Billy Clinton, Donny Trump, Georgie Bush, Dolly Parton, Candy Bergen, Sly Stallone, Reggie Jackson, Liza Minnelli, Linda Ronstadt and Laura Bush. I think we're still middle-aged, not senior citizens).

I had a lot of really shitty teachers in school, and many of them are described in my book, Stories I'd Tell My Children (but maybe not until they're adults. It's coming out on 4/1.

Mr. DePalma was one of the few good teachers I had, and I wrote about him in a brief section about my good teachers:

Lawrence DePalma taught me history in junior high school around 1959, and was not afraid to ignore the Board of Education’s plans if he thought he knew a better way to teach. Instead of using the latest slick and simplified textbooks, Mr. DePalma distributed tattered copies of Morey’s Ancient Peoples that he had diverted from a trip to the dump and guarded carefully year after year. He regarded their intellectual content as more important than their physical appearance. That itself was a valuable lesson. Rev. Martin Luther King said something similar a few years later in his “I have a dream” speech.

I'm looking forward to talking about the good-and-bad old days with Mr. DePalma after breakfast. I'm going to give him a copy of my book, along with a copy of Morey's that I bought on Amazon.

Mr. DePalma and my mother have given me a lot. I'm glad that they and I have survived to the point where I can give a little bit back.

For you kids (i.e., anyone younger than me) reading this, a brief sermon: It takes a hundred years to go from age-10 to age-18. It takes about an hour to go from 20 to 40, and about five minutes to go from 40 to 60. We don't know how much time we have left -- or how much time anyone else has left. If you're planning to do something important some day (like donating $25 to help Haiti), do it today.