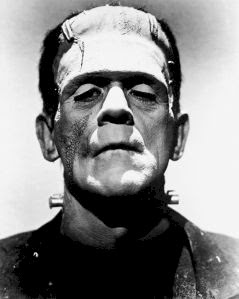 In 1818 Mary Shelley published a book in which Dr. Victor Frankenstein was able to transform a collection of inanimate parts into a near-human being.

I just learned that there is a method to reverse the process.

Today's issue of the New Haven Register carries an article about the use of technology in public schools, written by Elizabeth Benton.

Most of the article deals with such issues as permitting or banning iPods, texting in classrooms, podcasts replacing notes to parents, and smartboards replacing blackboards.

However, Elizabeth inadvertently revealed a much more important breakthrough in technology.

She wrote, "Formerly a technology teacher, Oberdick's classroom is a digital center."

AMAZING! Some 21st-century Dr. Frankenstein has discovered how to convert a living and breathing human being into an assembly of hard drives, microprocessors, Sheetrock and ceiling tiles.

OK, OK. I'm kidding Elizabeth and I admit that I'm not perfect. Every writer makes mistakes. That's why God gave us proofreaders and editors. But apparently God didn't give quite enough of them to my hometown paper.

Previously the New Haven Register printed two dates on different pages of the same issue, and claimed that a Civil War veteran died about 80 years before the war.

Actually, the Register is probably no worse than most papers, and is better than many. I have warm feelings for the paper. When I was in grade school, probably around 1958, my father introduced me to a Register reporter who helped influence me to become a writer. And in 1989 the paper published an article of mine that has grown into a book that will be out in April.