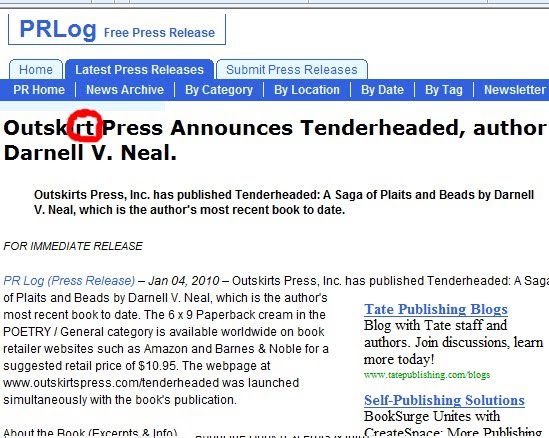 I really didn't plan on slamming OutskirtS Press again today. I thought I'd give the bozos a break for a few days; but I found something that's so good (i.e., so bad) that I couldn't delay passing it on.

I've come to expect that a press release from OutskirtS Press will include ads for competitors, overused  phrases and strange terminology. But this is the first time I've known the OutskirtS idiots to misspell the name of their own company!

If the company's "infrastructure of talented publishing artisans" (and a boss and boss's wife who majored in English in college) didn't notice that the last letter of their company name was missing from the title of a press release, what are the chances of them publishing a proper book?

There's probably no chance at all.

(And like all OutskirtS books, this one is deftly constructed of Paperback cream, is being aggressively promoted with pervasive online availability, was published simultaneously with the launch of a webpage, claims that an author's first book is his latest book, meets consumer demand, and can be ordered for the maximum price set by the author.)

If you have any doubts about Outskirts Press, the company wants you to know that "Outskirts Press represents the future of book publishing, today."

Maybe it's time to melt-down the printing presses. When prehistoric publishers had to chisel each word onto the wall of a cave, maybe they were more careful than the staff at Outskirt Pres.