What's next: a cure for the common cold or peace in the middle-east? 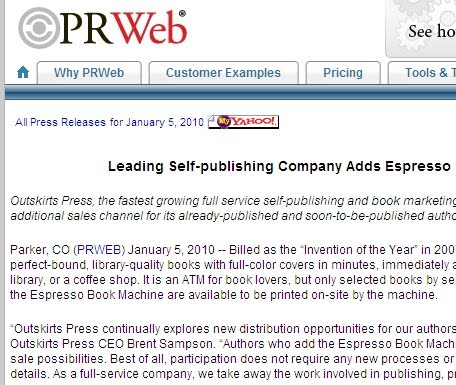 Hmm. Is Outskirts Press paying attention to me?

In the past I slammed the sleazy, incompetent and dishonest vanity publisher for using ineffective freebie press release distribution services to distribute "news" about both Outskirts and its author/victims' books.

Unlike the paid-for services, the freebie services get little attention from the news media they are aimed at, and they even carry ads for competitors of Outskirts and its authors.

Today, a press release from Outskirts announced that its books can be made available on Espresso Book Machines (just like hundreds of thousands of books from other publishers going back to last Spring).

What is surprising is that Outskirts has finally realized that when they spend zero to distribute a press release, they get pretty close to zero media coverage.

Amazingly, Outskirts actually shelled out at least $80 to tell the world about their latest news.

Of course, this change doesn't mean that Outskirts is making progress in other areas.