Even one person can make a difference,
but maybe he shouldn't 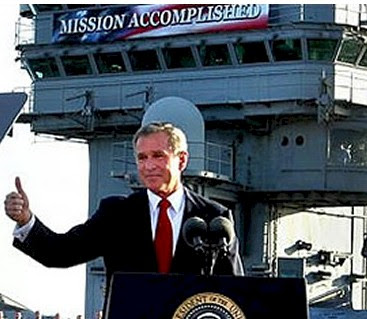 Each year at election time we are urged to vote because "even one person can make a difference."

Actually very few elections are decided by one vote, but in the U. S. Supreme Court, a one-person majority can radically change the course of history and the way we live, or die.

In 2000 in "Bush vs. Gore," by a 5-to-4 vote the Supremes decided that George W. Bush should become our 43rd presdent -- despite his loss of the national popular vote and widespread voting irregularities in Florida. CLICK for more.

By endorsing Dubya, the Court paved the way for all that Bush and Cheney did to screw up this country in the following eight years, including the invasions of Afghanistan and Iraq, the response to Hurrican Katrina ("Brownie, you're doing a heckuva job"), opposing the Kyoto protocol for cleaner air, limiting stem cell research, warrantless phone bugging, authorizing waterboard torture, cancelling the ABM treaty with Russia, and the Great Recession. (Some also blame them for the 9/11 tragedies.)

Ironically, unforseeable after-effects of the 2000 Supreme Court decision were Bush's nominations of John Roberts and Samuel Alito to the Court.

Yesterday Roberts and Alito helped to remake history by overturning laws and court rulings that limited political advertising by non-persons.

By a one-person majority, the Supremes have allowed the Teamsters Union, Ford, Sony, the Hong Kong & Shanghai Banking Corporation, Exxon-Mobil or presumably any other domestic or foreign corporation or union to spend millions or billions to influence the way American citizens vote.

I am, in general, a supporter of unfettered speech -- but that's for speech by people, not by deep-pocketed institutions that want laws changed to favor them.

One Supreme Court Justice, who could have voted the other way, has set us up for a scenario where a Senatorial candidate could be offered a $1 billion advertising campaign by Johnson & Johnson but just half a billion by Pfizer, and the candidate's loyalty will go where the big money is.

A candidate for governor who is offered advertising worth $1 billion by Ford, half a billion by Nissan and $300,000 by the United Auto Workers Union can be expected to follow the money.

It's logical to assume that a candidate for president who is offered $100 million in ad backing by Google, $90 million by Microsoft, $80 million by Apple, and $70 million by Yahoo will sell-out to the highest budder.

The decision to take that money is based on the desire to be elected -- not by a desire to serve the people, or the merits of pending and possible legislation -- and it shouldn't be that way.

If a new dog catcher is elected in Wasilla, Alaska because of a one-vote majority, the election probably won't radically change the way people live. But yesterday's decision can radically remake the nation and change the world.

Yesterday's decision has the potential to make American politics even more corrupt than it has been. Its chief beneficiaries will be politicians and the people and companies that sell advertising. The losers could be every American, or maybe even every person in the world.

It's time for Congress to make some new well-thought-out laws regulating campaign financing that the Supremes can't overturn.