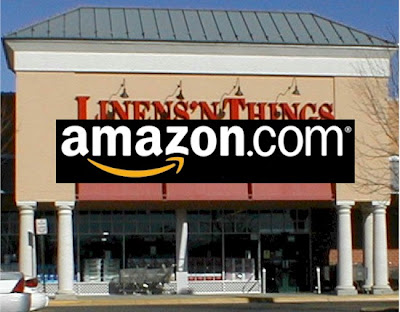 This is complicated, children, so pay close attention. There will be a quiz on Friday. Take notes.

In 2005, Amazon bought CustomFlix Labs, an on-demand DVD making company. The name was changed to CreateSpace, and the product line was expanded to include music and video downloads, CDs and books -- just like BookSurge.

In 2008, Amazon flexed its muscles and announced that publishers that want to sell their POD books through Amazon must have them printed by BookSurge, rather than by Lightning Source. Lightning is the dominant POD book printer, part of Ingram Industries which includes the largest book wholesaler in the U.S., and is a major supplier to Amazon and other booksellers.

Shortly after Amazon's announcement, Amazon was sued by BookLocker.com, a small print-on-demand company that claimed Amazon was engaging in unfair business practices in violation of federal antitrust laws. Amazon filed a motion to dismiss the suit, but a U.S. District Court judge denied Amazon's motion.

Despite many fearful shrieks by POD printers and self-publishers, Amazon never carried out its threat. Many books (including mine) are printed by Lightning and sold by Amazon.

While BookSurge and CreateSpace offered publishers easy access to Amazon's bookselling web pages, the services did not provide a simple distribution path to reach the majority of bricks-and-mortar booksellers, or BarnesAndNoble.com and other important online booksellers.

Last week CreateSpace announced an agreement with Lightning Source to allow CreateSpace's customers the option to have books printed and distributed by Lightning to reach a wider audience than CreateSpace itself could provide.

CreateSpace customers will have access to this enhanced print and distribution option as part of the CreateSpace Pro Plan, a program with lower prices for customers' own book orders and higher royalties for sales on Amazon.com.

The deal with Amazon is not the first instance of blurred definitions of Lightning Source's "competitor" and "customers." Vanity press Infinity Publishing normally competes with Lightning and prints books for Infinity author-customers, with limited disribution. Infinity offers an optional Extended Book Distribution program to distribute books through Ingram Book Group, with printing by Lightning Source. Infinity claims that “While their books are not as high quality as ours, they’re considered acceptable.”

That’s a bunch of crap. I -- like many independent self-publishers, most of Infinity’s vanity press competitors, and many major traditional publishers -- use Lightning/Ingram to print and ship books. My books look infinitely better than Infinity’s.

Meanwhile, Amazon realized that there was confusion, duplication and waste because of the overlapping services provided by CreateSpace and BookSurge. Last month Amazon began combining the two operations. CreateSpace will be the surviving brand and Amazon said that the integration will provide new benefits for authors and publishers.

On Sunday the Times of London reported that Amazon was stealthily searching for real estate to open bricks-and-mortar bookstores in England. This revelation comes right after the bankruptcy of Borders bookstores in the U.K.

Amazon could be responding to increasing customer demand for "web-to-store" transactions where products are ordered online and then picked up at a nearby physical store, rather than wait even one day for delivery. The timing is right for Amazon store openings. The Great Recession has killed many retailers, and landlords who are desperate to fill vacant space would presumably be eager to rent to a successful business like Amazon.

Since same-day delivery requires local warehouses filled with merchandise, it's not a giant leap to assume that Amazon might start doing business from former Circuit City, Steve & Barry, or Linens 'n' Things stores, or even SAAB dealerships.

If Amazon does set up retail operations, they would be ideal locations for the Espresso Electronic Book Machines. The "EBM"s are vending machines that hold digital files, paper, glue and ink and spit out books a few minutes after a keyboard is tapped. Lightning Source currently makes its customers' books available on Espresso machines.

There have been unconfirmed reports that Amazon personnel visited Iran and North Korea to negotiate the purchase of nuclear missles to wipe out Walmart and Barnes & Noble.

(Of course, I'm just kidding about the nukes, and as a writer and reader I love Amazon, but I'm glad I'm not a competitor.)

UPDATE: (from Reuters news service) Amazon denied that it has plans to open stores anywhere in the world, in response to the Sunday Times report that it was planning to open shops in Britain.

If they denied it, it must be true.