After 40 years of faithfulness, I've cheated on Nikon. Blame Tiger Woods, or Panasonic 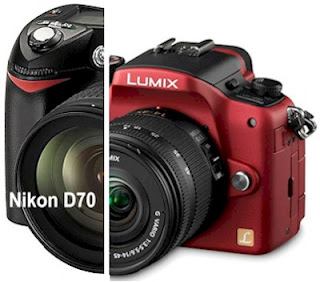 I'm a sucker for red. I have a 31-year-old tomato-red Fiat sports car. I have a  website that specializes in red phones. My favorite uncle and an important girlfriend had red hair. I even had red walls in my apartment until I married a different girlfriend who didn't like red walls. I refuse to eat "white pizza." If it doesn't have red sauce, it's not pizza.

As soon as I saw the new Panasonic Lumix G1 digital camera last year, I started salivating and panting. The G1 probably won every camera award there is.

I've been a Nikon fan and owner since 1969, starting with my first "grown-up" camera, the Nikon Photomic FTn. I bought it to use on my first post-college job as assistant editor of a hi-fi magazine, paying a friendly camera dealer 10 bucks a week from my meager $115 weekly salary. It was an expensive, huge, heavy machine, but it took amazing pictures and was ultra-reliable. The earlier manual version, the Nikon F, was the first Japanese camera to win the loyalty of pro photographers who were previously addicted to German Leicas. One FTn was taken on the Apollo 15 mission to the Moon. Mine traveled as far as England, and pictures taken with it ended up in Rolling Stone, Womens Wear Daily, my first book back in 1976, and were projected 10-feet-wide on the screen in my basement.

By today's standards, the FTn was primitive, and expensive. The only zoom lens had a range of just 43-86 millimeters, and I think it cost over $500. There was no built-in flash. A motor drive (which became part of $35 cameras in the 1990s)  was beyond the budget for an amateur like me.

Over the years I gradually upgraded to newer Nikons, with more built-in features, less heft and smaller price tags. I had an FE, then a miniaturized EM, then my first digital SLR -- the D70, a smaller digital rangefinder CoolPix P5000, and a pocketable CoolPix L6. They have all been superb picture-takers that have never let me down. They all still work.

In general, I use my big Nikon D70 DSLR for "serious" photography, and the compact Nikon Coolpix L6 is always in my briefcase or car for unplanned photos. In my office, there's the older Coolpix P5000 on a tripod for taking product pictures. I occasionally fondle the film cameras, but I haven't shot film in years.

People tend to stay with the beer brands, tool brands, car brands and camera brands they've been happy with. Dave, my best buddy from college, has long been a "Canon guy." Until last weekend, I was a "Nikon guy."

I've been well aware of the inroads that Panasonic has made into the digital camera business, especially since they started using Leica lenses on some products. Panasonic has long been an important innovator in video cameras and camcorders, and now they're kicking ass in still photography, too.

I'm not ready to empty my shelf full of Nikons, but I was definitely ready to add a Panasonic to the collection, and it will not just stay on the shelf.

The Lumix G1 is the world’s first Micro Four Thirds system camera. Panasonic says it's the world’s smallest and lightest digital interchangeable lens camera system, with the body and standard "kit" lens weighing about 20 ounces. It fills an important middle ground between my big and small Nikons, offering the quality and versatility of an SLR in a much smaller package (about one-third smaller than the D70), and has a bigger display than my other cameras.

Based on the new Micro Four Thirds System standard, the Lumix G1 eliminates the internal moving mirror and prism that are used in other single-lens reflex (SLR) cameras, so it reduces the size and weight significantly.

With the mirror-less system, the G1’s distance between the lens mount and the image sensor, has been reduced from 40 mm to approximately 20 mm.

The G1's Full-time Live View lets you see in the LCD screen while making adjustments to see how the exposure, white balance, aperture and even the shutter speed will affect the photo. This kind of super-easy live-view shooting has never before been possible with a conventional digital SLR camera.

The 3.0-inch free-angle LCD with high 460,000-dot resolution 180° horizontally and 270° vertically, makes it easy to capture shots from extreme angles without getting into an awkward position. And when the lighting around you changes, the LCD backlighting level automatically changes too, so you get easy-on-the-eyes viewing at all times. You can flip the screen around to face front for self-portraits, or to allow subjects to see themselves.

In My Color mode you can freely adjust the color, brightness and saturation of an image, while checking it with Full-time Live View. This gives you the power to control how your image will look. You can even make dramatic color changes.

Film mode lets you capture photos with a special mood or expressiveness. Much like changing the film type in a film camera, you can get a wide range of expression based on six color modes and three monochromatic modes. When the multi-film mode is selected, you can record pictures having up to three different effects with each press of the shutter button.

1920 x 1080-pixel HD (high-definition) photo recording. The G1 shoots wide-screen, 16:9, full-HD images. These images can be displayed on an HDTV, which handles about four times the data of a standard-definition TV.

The camera has a high-definition output so it's easy to connect to an HDTV for high definition viewing. If your TV is HDMI compatible, a single HDMI mini cable is all you need. If you have a Panasonic Viera HDTV, you can also operate the G1 with the Viera remote control for even easier viewing.

The image sensor has 13.1 total Megapixels -- over twice the resolution of my newest Nikon. It can provide both RAW and JPG versions of the same shots. There's a Supersonic wave filter dust reduction system. Lens focal length is 14mm to 45mm -- the 35mm film camera equivalent 28mm to 90mm, which I've always considered the ideal zoom range for most shooting. Back in my pre-zoom Nikon days, my favorite lenses were 28mm and 85mm.

The Lumix G1 is apparently the world’s first interchangeable lens camera with color choices, just like some Panasonic phone models. You can choose basic black, electric blue or bloody red models. I like bloody/tomato/Fiat red.

For current Four Thirds users with a collection of lenses, an optional mount adapter will allow Four Thirds lenses to be compatible with the Lumix G1.

Last weekend included the beginning of Chanukah and my 38th anniversary - - two reasons for gifting.

My practical wife wanted a set of new Michelin tires for her Town & Country van. I got them at Costco. Seeking a bit more excitement in my life, and perhaps inspired by Tiger Woods, I cheated on Nikon and I got a sexy red Lumix.

It's an amazing camera. Images are bright and sharp. I can compose a shot with the viewfinder or the large flip-screen. There is no lag between pressing the shutter button and capturing an image. The zoom lens covers the ideal range for me. The built-in strobe is so powerful that I probably won't buy an external strobe. The menu system is logical and easy-to-use -- much better than on my digital Nikons. Unlike my film Nikons, the lens cap never pops off when it shouldn't.

I have only one criticism. The strobe light doesn't pop up automatically in low-light situations. However, it's possible that it really can auto-pop, but I just have not figured out how to activate the feature. I guess I'll have to do a very un-manly thing: RTFM. I hope I'll be forgiven.