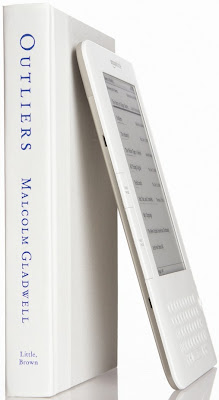 Amazon.com announced today that it is lowering the price of its #1 bestseller Kindle eBook reader to $259, down from $299. The company also introduced a new addition to its Kindle family: a model that works with both U.S. & non-U.S. wireless services. The international model enables readers to wirelessly download content in over 100 countries and territories. Readers can pre-order "Kindle with U.S. & International Wireless" starting today for $279 at www.amazon.com/kindle. Shipping should start on October 19.

Kindle wirelessly downloads books, newspapers, magazines, blogs, and personal documents to a crisp, high-resolution 6-inch electronic ink display that looks and reads like real paper. Kindle utilizes the same 3G wireless technology as advanced cell phones, so you never need to hunt for a Wi-Fi hotspot or sync with a PC. Readers can wirelessly shop the Kindle Store, download books in less than 60 seconds, automatically receive newspaper and magazine subscriptions, receive personal documents, and read from their library—now in over 100 countries and territories.

The U.S. Kindle Store now has more than 350,000 books, including New Releases and 104 of 112 New York Times Bestsellers, which are typically $9.99 or less. More than 75,000 books have been added to the Store in just the last five months. Starting today, Lonely Planet guides are now available in the Kindle Store, joining existing travel guide selection from publishers Rick Steves, Frommers and Michelin.

Over 50 major U.S. and international newspapers are available in the Kindle Store for single purchase or subscription, and can now be delivered wirelessly in over 100 countries and territories. Over 35 popular and specialized magazines, such as The Newsweek, Time, The New Yorker, and The New England Journal of Medicine are also available. U.S. Kindle customers can also continue to take advantage of the Kindle Store’s selection of over 7,000 blogs and receive new posts while traveling overseas.

At just over a third of an inch thin (0.36 inches) and weighing just over 10 ounces, Kindle is pencil thin and lighter than a typical paperback. Kindle’s 6-inch electronic ink display reads like printed words on paper because the screen works using real ink and doesn’t use a backlight, eliminating the eyestrain and glare associated with other electronic displays. Kindle’s 2 GB of memory holds up to 1,500 books and Kindle books are automatically backed up by Amazon so customers can re-download titles from their library.

Sony, Kindle's main competitor, has updated its line of eBook readers, and should be selling its first wireless model by the end of 2009. The new "Reader Daily Edition" will provide wireless access via AT&T’s 3G network. There are no monthly fees or transaction charges for the basic wireless connectivity, and users can also load personal documents or content from other compatible sites via USB. The Daily Edition has a seven-inch touch display, internal memory for more than 1,000 books, and expansion slots for memory cards to hold even more. Its price is about $399.

Other new eBook readers are coming from less-well-known electronics brands.

iRex Technologies expects to sell its "iRex wireless DR800SG" through Best Buy later this month, and through other dealers next year. It will offer free worldwide wireless over-the-air e-book downloads. The iRex will use Verizon service in the U.S. and Qualcomm in other countries. The iRex e-reader has an 8.1-inch screen and works with the Barnes & Noble e-bookstore as well as other open Internet e-booksites. The first model uses a stylus, but the company plans a finger-operated touchscreen model for next year.

Other companies such as Samsung are selling e-readers outside the U.S., and they may eventually come here.

eBook selection has also increased tremendously this year.
Posted by Michael N. Marcus at 4:15 AM