Virtualbookworm made a little improvement to their homepage, but they have a long way to go. 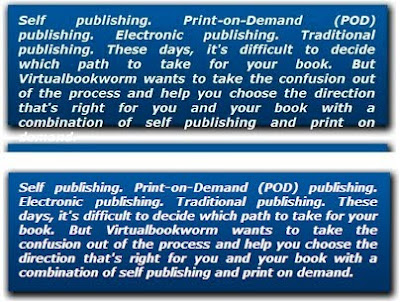 On August 26 I criticized Virtualbookworm for having terrible typography and other problems on their website.

Virtualbookworm is a pay-to-publish company. Allegedly they have some standards for accepting books and are not a vanity press. I think they are a vanity press.

In addition to their website designer's extremely ugly and inappropriate justified type (shown at the top, from their homepage), their copywriter could not decide between "Print-on-Demand" and "print on demand." The designer hid the last "demand" by placing white type on a white background.

Other pages had bad writing, bad typography, factual errors, bad grammar, an empty "news" section, and a non-functioning link to the company's blog.

Apparently one of the company's bookworms read my criticism and ordered a modification of the homepage graphic. Someone tightened up the type so the last word is no longer lost as a white word against a white background.

The justification, previously extremely atrocious, has been improved to the point where it rates just a "very ugly" (just like one of the Worm's books that I bought.)

Unfortunately, their copywriter still could not decide between "Print-on-Demand" and "print on demand," and the company is still lying about providing "a combination of self publishing and print on demand."

Just as no one can eat lunch for you, take a bath for you, have surgery for you or commit suicide for you, NO ONE CAN SELF-PUBLISH FOR YOU.

Only YOU can SELF-publish you.

If you pay a company to publish your books, you are NOT a self-publisher.

The company says, "After researching the various "alternatives," [the company's founder] discovered a number of subsidy publishers that would publish any author ... for a price. Unfortunately, many reviewers (and readers) thumb their noses at books from such houses, since all it takes is cash to get published by them." "...as with "traditional" publishers, we carefully review each manuscript and only offer contracts to authors who truly have exceptional manuscripts. We don't print garbage."

Unfortunately, I bought and read one of the Worm's books. It's not garbage, but it is ugly, inept, inaccurate, and unprofessional.

Sadly, the book is well-written and provides useful information, but it is seriously diminished by bad interior design, an ugly cover, inadequate editing, and a terrible index. There is also a big messy squiggle of glue on the first page. Apparently Virtualbookworm does not examine books before shipping. This one should never have been let out of the wormhole.

The company's website still has problems. There's a defective Twitter link. The news section still has no news. Online press releases have bad grammar, inconsistent spelling and terrible, almost childlike, writing. The site even says "book markers" instead of "bookmarks."

The company should not have to depend on ME to point out its errors.

Maybe Virtualbookworm can print virtual books for virtual worms, but I would never trust the company to publish a real book for real readers.

The company also has a stupid name.
Posted by Michael N. Marcus at 6:39 AM