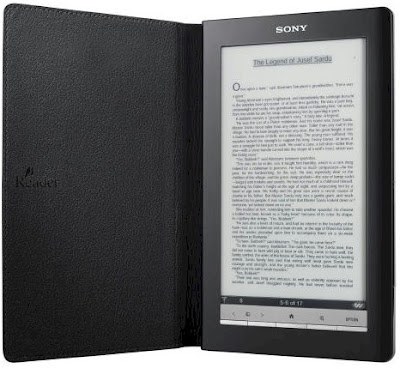 Although the Sony Reader debuted in 2006, before Amazon’s Kindle, the Kindle quickly surpassed Sony in reader sales and in available titles. In 2009, Sony crept ahead in titles and introduced new fourth-generation models at lower price points, as well as a wireless Reader. Sony also reduced the prices of new releases and New York Times bestseller titles in its eBook Store to $9.99 to match Amazon and Barnes & Noble.

The PRS-300 Reader Pocket Edition has a five-inch electronic paper screen and is available in a variety of colors. It can be operated with one hand, and fits into a purse or jacket pocket. It can store about 350 standard eBooks, and provides up to two weeks of reading on a single battery charge. Its suggested retail price is $199, probably the lowest-priced eBook reader at the time of its introduction.

The PRS-600 Reader Touch Edition features a responsive, menu-driven, six-inch touch screen panel for quick navigation, page turning, highlighting, and note-taking with a finger or stylus. You can take handwritten notes with the stylus or type with the virtual keyboard. Notes can be exported and printed. The Reader Touch Edition includes an onboard Oxford American English Dictionary that allows you to look up a word by simply tapping on it. The Touch Edition also offers five adjustable font sizes, as well as expansion slots for both Memory Stick PRO Duo and SD cards, so it can handle an almost unlimited number of stored books. Touch Edition comes in red, black or silver and retails for about $299. It replaces the similar-size, $350 PRS-700.

Both new models use E Ink Vizplex electronic paper dis-play that mimics the look of ink on paper. Sony’s eBook Library software 3.0, which includes support for many Mac computers as well as PCs, makes it easy to transfer and read any Adobe PDF (with reflow capability), Microsoft Word, BBeB files, or other text file formats on the Reader.

Kindle eBooks can be downloaded wirelessly and instantly, but most Sony eBooks must first be downloaded to a PC, and then copied to a Sony Reader with a USB cable.

The new Reader Daily Edition (due in December) will provide wireless access via AT&T’s 3G mobile broadband network to Sony’s eBook. There are no monthly fees or transaction charges for the basic wireless connectivity and users can also load personal documents or content from other compatible sites via USB. It has enough internal memory to hold more than 1,000 books and expansion slots for memory cards to hold even more. It has a seven-inch touchscreen and its price will be about $399.

This week Sony announced its Library Finder application. Sony, working with OverDrive, a distributor of eBooks, will offer visitors to the Sony eBook Store easy access to their local library’s collection of eBooks.

Thousands of libraries in the OverDrive network offer eBooks optimized for the Sony Reader, and visitors can now find these libraries by typing their zip code into the Library Finder. Through the selected library’s download website, visitors can check out eBooks with a valid library card, download them to a PC and transfer to their Reader. At the end of the library’s lending period, eBooks simply expire, so there are never any late fees.

Until the spring of 2009, Amazon offered many more book titles for downloading to Kindle than Sony offered for its Readers. The balance of power changed greatly when Sony made a deal with Google to offer more than a half-million public-domain books that Google has scanned and digitized, boosting the available titles from Sony to more than 600,000. These Googled books are available FREE to Sony Reader owners.

Books from Google include an extensive list of traditional favorites, including A Connecticut Yankee in King Arthur’s Court and Black Beauty, as well as more obscure material and non-English books. People can search the full text of the col-lection or browse by subject, author, or featured titles.

Once downloaded, these books can be read on your PC or transferred to a Sony Reader like any other eBook available from the Sony eBook Store. Sony Reader customers can regis-ter up to five Readers to one account for sharing downloaded books.
Sony has a section of their website for publishers to establish a relationship for selling eBooks from the Sony store at
http://ebookstore.sony.com/publishers/
Posted by Michael N. Marcus at 9:57 AM