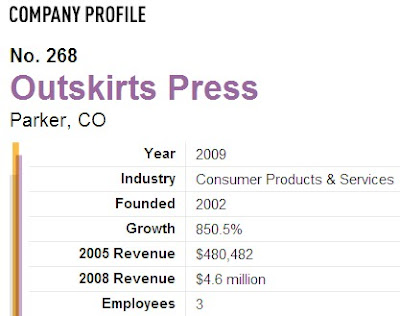 Outskirts Press is the vanity press I love to hate.

They want prospective author/customers to think they are a "self-publishing company," but they're not. (More about that later.)

Vanity presses make most of their money by selling services to writers -- not by selling book to readers.

Why do I love to hate Outskirts?

It's because they do so much, so wrong, that I have a good time pointing out their failures, foibles, and distortions of reality.

They recently distributed some alleged "news" via several of the freebie press release services (not the first-class services that charge for distributing releases and get better pickup by the news media).

The headline writer wants the world to know that Inc. magazine declared Outskirts to be the "Fastest-Growing Self Publishing Company."

Forget, for a moment, that Outskirts is not a self-publishing company.

The release stupidly says: "sales of self-publishing books climbed 132% while the sales of traditionally published books fell by 3%."

Even worse, Outskirts is seriously distorting the statistics (originally provided by R. R. Bowker). The 132% growth was for on-demand books, which include much more than self-published books. Major traditional publishing companies now print-on-demand, as do university presses, vanity presses, and real self-publishers.

(Here's the actual statement from Bowker: "Bowker projects that 285,394 On Demand books were produced last year, a staggering 132% increase over last year’s final total of 123,276 titles.")

Outskirts is notorious for deception, exaggeration, and stupid errors. Company boss Brent Sampson wrote a book that showed that he didn't know what a foreword is, and he forgot the last name of the author of Roget's Thesaurus -- among other sins. He apparently had no editor or a blind editor. Or maybe none of his employees is willing to correct the boss. Some of his employees are relatives.

Brent promotes himself as a "best-selling author." I've twice asked for some specifics about his bestseller status, but never received an answer.

A book about flea removal from pregnant three-legged albino Weimaraners could sell exactly one copy and still be the BESTSELLER in its field. There is no law that requires an explanation for a bestseller claim. Anyone can call any book is a bestseller.

In a promotional email, one of the Outskirtsers said, “Outskirts Press was her first choice because our authors keep all their rights. And she liked our pricing flexibility. The other publisher pays her 200% less in royalties. Yes, 200% LESS.”

How can something pay 200% less than something? 100% less would be zero. Did the other publisher pay less than nothing?

The press release says that from 2005 through 2008, "Outskirts Press grew at a rate of 850.5%, making it the fastest growing self-publishing and book marketing company and #268 among all American businesses. Outskirts Press is the 21st fastest-growing business in the Consumer Products & Services category."

Even the last sentence is misleading. Book publishing is certainly not a consumer service. If Outskirts was more properly listed in Business Products and Services, its ranking would drop a few places.

Additionally, Inc's rankings are of "America’s Fastest-Growing Private Companies" -- not ALL American companies, as Outskirts wants us to believe.

Inc conveniently supplies a press release template for use by honorees.

Here's part of it: "Inc. magazine today ranked COMPANY NAME NO. XX on its 28th annual Inc. 500, an exclusive ranking of the nation’s fastest-growing private companies."

Here's how Outskirts modified the template to remove the reference to "private companies.": "Inc Magazine released their annual Inc 500 list of the nation’s fastest-growing businesses."

In truth, Inc never applied that description to Outskirts Press.

The Outskirts company profile published by Inc says that the company's 2008 sales were $4.6 million. While that revenue is equal to three or four McDonalds restaurants, it does not mean the company is a titan in the publishing business.

Business information service provider Manta.com said that Outskirts competitor Author Solutions "has an annual revenue of $29,300,000 and employs a staff of approximately 260." Random House, the world's largest English-language general trade book publisher, reportedly has annual sales of about $2.3 billion and about 6,000 employees.

The Outskirts company profile published by Inc says that Outskirts has just three employees. Judging by the poor quality of the company's output, those three people must be terribly overworked.

Outskirts Press is a vanity press that calls itself a "self-publishing company." It grows by exploiting ignorance and gullibility. As journalists and prospective customers continue to catch the company's lies, distortions and stupid errors, its growth will not continue.
Posted by Michael N. Marcus at 5:30 AM