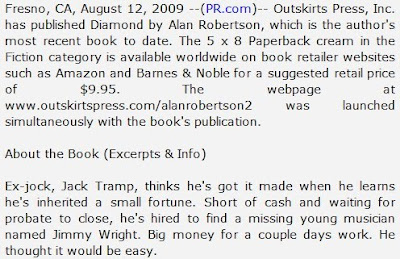 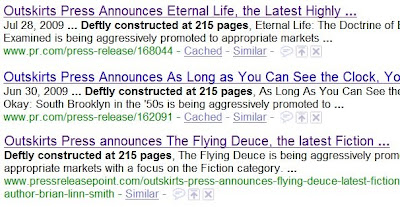 The more I read about Outskirts Press, the less I think of them. They do such a lousy job promoting their own business in press releases and promotional books, that I would not expect them to be much help to their author/customers, either.

The Outskirts press releases that I've seen, prepared both for Outskirts and for it author/customers, are amateurish and error-filled. Additionally, rather than use the paid-for press release distribution services that get more respect from the news media, Outskirts uses freebie services that are usually ignored by the media, or that don't distribute releases to the right media.

A Google search for a key phrase in the release I show up above for Diamond shows exactly FOUR links. Three links go to the free PR services, and one link is for a British blog. That's pathetic, and not the way to sell books.

A similar search for a key phrase from the Outskirts book Eternal Life (chosen at random from a list of recent releases) also shows exactly four Google links -- and each one is for a PR distribution website!

Apparently not even one other website thought it was newsworthy. Outskirts does not know how to sell books, but they do know how to collect money from ignorant authors.

By comparison, a news release for one of my books, distributed through PRWeb (which is not a freebie), was picked up by hundreds of websites. Even many months later, it is still on about 90 sites.

The fragment of a custom press release up at the top shows the abysmal quality of Outskirts' release writing. It has bad grammar, extraneous words, improper typography, ugly justification, non-sentences, etc. It's not worth $1.99, let alone $199.

If you look at the group of Google links for Outskirts books below the release, you'll see that three different books are all described as "deftly constructed at 215 pages...."

I don't know if all of the books were constructed with equal deftness, but it's obvious that the actual releases are not particularly deft. Daft might be a better adjective.

I find it strange that the three randomly selected books all have the same number of pages. It's also strange that they have 215 pages. Since a piece of paper has TWO sides, a page count is almost always shown as an even number, whether or not the number includes blank pages at the back of a book.

In addition to the "deftly constructed phrase" that seems to appear in every Outskirts press release, the company uses the similarly ubiquitous "being aggressively promoted to appropriate markets."

If the press releases are ignored my the media, Outskirts has a lot to learn about aggressive promotion.

It appears that Outskirts Press is run by a bunch of ignorant fools. Sadly, its customers seem to be equally deficient.
Posted by Michael N. Marcus at 4:55 PM