$30,000 book royalties in one month?
It's time to pick on Outskirts Press again. 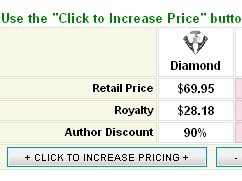 Outskirts Press and its often-clueless boss Brent Sampson have been frequent targets of this blog.

I don't hate them. I'm glad they exist because they give me something to write about. They are easy and amusing targets because they combine ignorance, incompetence and sleaziness, with great visibility.

Outskirts Press is basically a dressed-up vanity publisher, a company that makes most of its money by selling services to writers, not by selling books to readers.

Outskirts has previously called its business "custom book publishing" and "on-demand publishing," but has recently adopted a new label: "Independent Self-Printing." They're trying to capture some glamor and credibility from "indy" musicians and film makers.

The company uses scare tactics in an effort to capture business from would-be real indy publishers. Outskirts lies about the alleged difficulties of getting an ISBN bar code and selling books online. It warns of the “hassles of independent self-publishing, like guessing print-runs, managing inventory, and the responsibility of order fulfillment.” I’m an independent self-publisher, and I never ever think about print runs, inventory or order fulfillment.

One recent publicity outburst from Outskirts has highlighted their customer/author Gang Chen, who "has earned over $100,000 in author royalties in six short months."

Chen's blog offers some useful advice, but don't be fooled by the headline, "How You Can Earn $30,000 a Month through POD Publishing."

Chen's experience is extremely atypical and no one should spill saliva while dreaming of emulating him. Be aware of three things:

(1) Chen's book is highly specialized. It's a study guide needed for professional advancement. It's a very important book aimed at a very small audience for whom the book price is not significant. It's like a college textbook that students must buy for $100 or they can't take a course.

(2) Because of the small audience, it's highly unlikely that the sales volume (about 1,000 copies per month) and royalty payments will stay at the recent high level month-after-month, year-after-year.

I compliment Chen for filling a need and getting paid well for it. HOWEVER, if he became a real independent self-publisher instead of using Outskirts, he probably could have made even more money.

According to the chart on the Outskirts website, if Chen paid $999 or more for an Outskirts "Diamond" package, he earns $28.18 per book.

If on the other hand, Chen decided to do a little bit more work himself, or hired a freelance designer and editor for probably less than what he paid to Outskirts, he could have had the books produced directly by Lightning Source (the same printer that Outskirts often uses) for just $4.54 per book (plus a small set-up fee).

If Chen kept the $69.95 list price and allowed Amazon.com and other online booksellers the normal 20% discount, he could have made $51.42 per book -- nearly twice the $28.18 that Outskirts pays him!

By using Outskirts Press, Gang Chen is making less money than he could be making, or his readers are paying more for his books than they could be paying, or both.