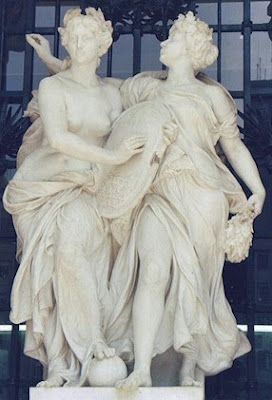 In ancient Greek mythology, the muses were goddesses or spirits who inspire the creation of literature and art. There were originally three muses, but the group later grew to nine.

In Renaissance and Neoclassical art, the muses were equipped with specific props to help identify them. Calliope (epic poetry) carries a writing tablet; Clio (history) carries a scroll and books; Erato (lyrical poetry) has a lyre and a crown of roses; Euterpe (music) carries a flute; Melpomene (tragedy) has a tragic mask; Polyhymnia (sacred poetry) often has a pensive expression; Terpsichore (dance) is often portrayed dancing and carrying a lyre; Thalia (comedy) is usually portrayed with a comic mask; and Urania (astronomy) carries a pair of compasses and the celestial globe.

The word "muse" is used in modern English to refer to an inspiration, but also exists in "amuse", "museum" (from muselon -- a temple where the muses were worshipped), "music", and "musing upon."

Traditionally muses have been beautiful goddesses. So far I've had three muses, and they are all women. I don't know if women writers, artists and musicians have male muses.

Sometimes a live muse may provide active encouragement, but sometimes a muse may just be lurking in the background of the mind. Sometimes a muse will be hovering above, always observing, visible and inspiring.

Creativity often includes an innate desire to please, perhaps going back to infancy and childhood when we want to make mommy happy so we get fed. When a muse is of the opposite sex, there can be a courtship aspect. Even if there is no feedback, a writer can be stimulated to do better and better, to win the heart of the goddess. A male writer may even imagine having sex with the goddess, and his words become a subconscious gift, like flowers or candy or jewelry while dating or trying to seduce. Elton John wrote, "My gift is my song and this one's for you."

For most of my writing career I wrote about things, and how people related to things.

About five years ago I became comfortable writing about people without the things, and writing fiction as well as non-fiction. This coincided with my reconnecting by email with "D," a girlfriend from college -- and almost my wife. After a while she lost interest in communicating with me, and I stopped writing the book she inspired me to start. I later reconnected with "P," one of the first females I was attracted to. I shared my cookies with her in second grade. Her presence helped me finish the book.

This year I finally became comfortable writing about emotions.

This important evolutionary development coincided with my re-connecting with "R." She was a very important girlfriend from high school, and the first woman I thought about marrying. She has become my most powerful muse and is responsible for my completion as a writer.

This muse and I may write a book together. I hope we'll be able to amuse each other.

I've been married for over 37 years, but I never thought my wife was my muse. Perhaps because I did win her heart and we did marry and are still together, there’s less urge to please her. Perhaps her daily physical presence weakens the more spiritual connection necessary for musing. I don’t know. Maybe she really has been one of my muses but I just didn’t realize it.

(some info from Wikipedia)
Posted by Michael N. Marcus at 5:05 AM