Revisionist history & revising my memoir
during the Days of Awe 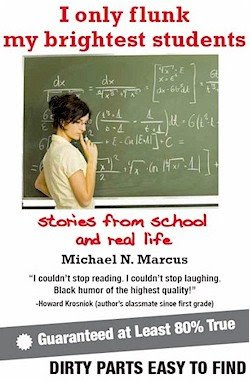 Those who know me and those who've read previews of my memoir, "I only flunk my brightest students -- stories from school & real life," know I hated high school.

I was not alone. Some of the kids wore pins that proclaimed OHIM (Oh Hell It’s Monday), TGIF (Thank God It’s Friday) or IHTFP (I Hate This Fucking Place).

Despite a few wonderful teachers and many great friends, the school, as an institution, represented illogic and repression, not education or enlightenment.

Our principal proudly informed us that a magazine described Hillhouse High School as a “public prep school for Yale,” but the kids weren't impressed. School spirit was invisible except when we cheered our football and basketball teams. (However I did buy and still have a bottle of ’64 Moet champagne that was bottled in the year we graduated.)

Yesterday, as I finished my writing and needed to verify some names, I visited Hillhouse. I felt strangely attracted to the school that repulsed me as a student a great many years earlier. My library research took only minutes, but I did not want to leave my school.

Accidentally but appropriately, I was there during the “Days of Awe,” the period between Rosh Hashanah and Yom Kippur when we Jewish people are supposed to be especially introspective, and to look back and to seek forgiveness.

Before my visit, the last page of my book was merely going to have a joke on it, but after my visit I don’t want the book to be seen as just an attack on my school. I changed the page to make the book end much more favorably than I previously thought possible or would even have bothered to do so.

I walked through the hallways and up and down the stairs. I sat in a classroom, peed in a boy’s john, gripped an old water pipe to feel the building’s pulse, sat in the courtyard and marveled at the size and strength of a tree that I wanted to chop down 45 years earlier, to spite the crazy teacher who made us wave and talk to it.

I spoke to a librarian who had been at the school for over 40 years. And to a coach who had graduated in 1982 and stayed around. And to a secretary who graduated in 2002. None of them would rather work anywhere else.

Just as parents make mistakes with their first child and do better with the younger kids, maybe this old school learned from what it did wrong with the class of 1964, and that experience made the school better for those who came later.

I spoke to some students. They were young enough to be my grandchildren. They said Hillhouse is a good school and they like it there. I believe them. I wouldn't mind being a student there again if I had the chance.